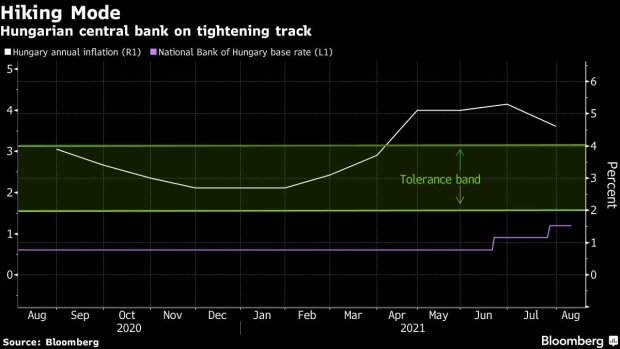 (Bloomberg) -- Hungary raised interest rates for the third time in as many months as focus shifted to whether policy makers may be preparing to slow Europe’s most aggressive tightening cycle.

The central bank raised the benchmark rate as expected by 30 basis points to 1.5%, the highest in the European Union and matching the pace of hikes in June and July. A statement explaining the decision will be published at 3 p.m. in Budapest and a briefing will also take place.

“I don’t think a lot of people expect the central bank to continue raising rates by 30 basis points in September, so if there’s a reference that it will, then that would be hawkish,” said David Nemeth, a Budapest-based economist at KBC Group NV. “It’s more likely that they will keep it vague as regards the size” of the next rate hike.

The forint has appreciated 3.2% against the euro over the last month for the biggest gain among 31 major currencies tracked by Bloomberg. The central bank on Tuesday also raised the overnight deposit rate to 0.55% from from 0.25% and increased the one-week collateralized loan rate to 2.45% from 2.15%.

Policy makers around the world are trying to balance the risk of keeping borrowing costs low to spur economic recoveries as virus variants cause new outbreaks and vaccination campaigns flag against the danger that excessively loose policy may fuel spiraling inflation.

Hungary has been at the forefront of monetary tightening in Europe, trailed by the Czech Republic, which also raised rates back-to-back in June and July and has signaled further hikes. Other non-euro area EU members from the region, including Poland and Romania, are putting off rate increases despite intensifying price pressures.

Hungarian policy makers have stressed that they’ll keep up the tightening cycle until inflation is on track to hit the central bank’s 3% target over the monetary horizon.

While the pace of price-growth slowed in July from a nine-year high, record second-quarter economic growth data showed that the speed of the recovery may generate further upward inflationary pressure.