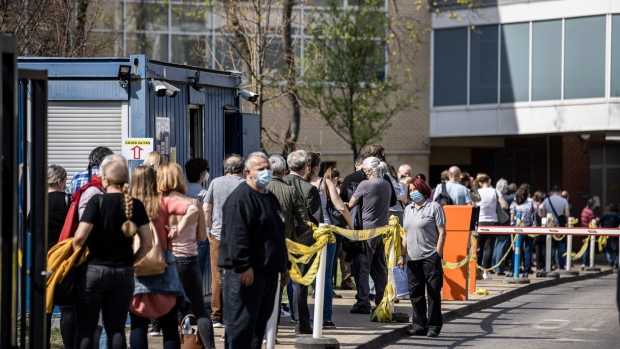 Patients wait in line outside a vaccination point at Semmelweis University Hospital in Budapest, Hungary, on Thursday, April 1, 2021. Hungarian Prime Minister Viktor Orban vowed to ease virus curbs soon even as his nation has the world’s highest Covid-19 death rate and reported a big jump in fatalities. , Bloomberg

(Bloomberg) -- Hungary reported a daily record in Covid-19 related deaths on the day it started easing virus curbs, reinforcing concerns that the relaxation of rules came too early in the country with the world’s highest fatality rate currently.

Health authorities reported 311 coronavirus deaths on Wednesday, when the government shortened the curfew, allowed most stores to reopen and most services to resume.

Prime Minister Viktor Orban announced the easing on Tuesday after 2.5 million people, or a quarter of the population, had received at least one vaccine dose. While that makes Hungary’s inoculation campaign the second-fastest in the European Union, to date only 10% of Hungarians have received two shots for full vaccination.

The easing was implemented over the objection of doctors, who had called for tighter rules after Covid-19 patients overwhelmed hospitals, leading to a spike in deaths.