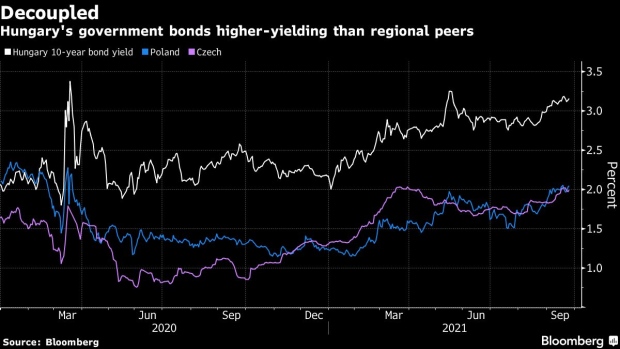 Hungary’s debt chief expects a “soft landing” for the local bond market from the central bank’s tapering of its asset-purchase program, part of one of the most aggressive monetary tightening campaigns in the European Union.

The central bank cut its weekly bond-buying target to 40 billion forint ($131 million) from 50 billion forint last week, the second 10-billion forint reduction in as many months. It plans to keep the current purchase goal in place until a December review.

“We should be able to carry this out with a soft landing, without much turmoil,” Debt Management Agency Chief Executive Officer Zoltan Kurali said in an interview on Friday. “The amount is totally fine.”

A “decisive withdrawal” of the central bank’s quantitative-easing program would risk a selloff in Hungarian bonds, while tapering may nonetheless continue to push yields higher, UniCredit SpA economist Dan Bucsa said in a Sept. 16 research note. The yield on Hungary’s 10-year forint bonds hovered near 3.17% on Monday, close to the highest since May.

The government plans to boost sales of forint-denominated floaters maturing in 2029, having already sold more than 1 trillion forint of similar notes due 2027, said Kurali, a former Deutsche Bank AG executive. Floaters aren’t in the spectrum of securities bought by the central bank.

With domestic yields on the rise, Hungary unexpectedly revised its financing plan for this year to sell $4.25 billion in dollar-denominated bonds as well as 1 billion euros ($1.17 billion) of notes two week ago.

The money is partly aimed at plugging a financing gap arising from the European Union executive’s decision to delay the approval of the country’s pandemic recovery funds over rule-of-law concerns. About 1 trillion forint equivalent, or $3.3 billion, can be used to pre-finance spending next year, Kurali said.

By bringing a big debt issue forward to this year, when Hungary is posting record economic growth as the country rebounds from the coronavirus pandemic, the plan may help put the public debt-to-gross domestic product ratio on a decreasing path through 2023, Moody’s said in a statement late Friday.

Hungary is still considering issuance of green Panda bonds, or yuan-denominated notes issued by foreign entities in China’s local market. The issuance, if it goes ahead, may be in the 1-billion to 2-billion yuan ($155 million-$309 million) range, Kurali said.

The efforts to sell bonds in Asia reflect Hungary’s strategy to maintain closer ties with the Chinese economy. Hungary sold 2 billion-yuan of three-year Panda bonds in 2018 after a 1 billion yuan pilot issuance the year before. In 2016, it sold debt on China’s offshore Dim Sum market, the first in the Chinese currency by an eastern European country.

Even with the recent increase in foreign issuance, Hungary intends to keep its share of foreign-currency share of its public debt in the 10%-20% range.

“I don’t expect our strategy to change in a way that would cause us to systematically cross the 20% limit,” Kurali said.