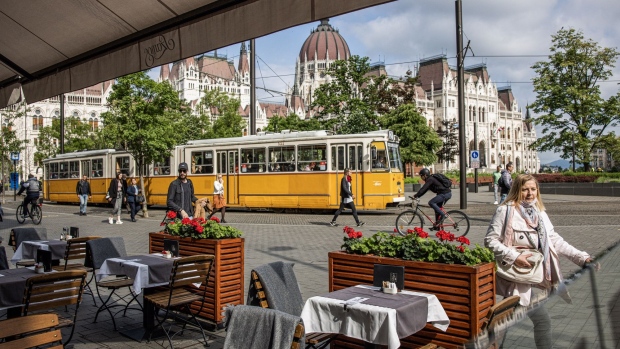 A tram travels past an empty restaurant terrace in Budapest, Hungary, on Tuesday, May 25, 2021. Hungary is moving closer to the European Union’s first major increase in interest rates this year, with policy makers poised to flag the start of a monetary-tightening cycle next month. , Bloomberg

(Bloomberg) -- Hungarian Prime Minister Viktor Orban redoubled his focus on the economy less than a year before elections in a bid to puncture opposition momentum from a row over a controversial Chinese university campus project.

The government is launching a “national consultation” focused on the economy, including a plan to pay as much as $2 billion in family tax rebates early next year and to raise the minimum wage, Orban said at a televised briefing on Thursday.

Orban is looking to shift the conversation with the non-binding consultation -- questionnaires sent to voters and backed by months-long state advertising campaigns -- after the government was forced to put a plan to create a private campus for China’s Fudan university in Budapest on hold.

The final decision on the campus, planned to be financed by taxpayer funds, will be made by Budapest voters in 2023, Orban said after opposition parties rallied against the project.

Budapest Mayor Gergely Karacsony, the front-runner to become the opposition’s candidate to challenge Orban, has pointed to the taxpayer-funded campus as evidence of the premier’s drift from western democratic values. The opposition, which has united for first time for a parliamentary election, is neck-and-neck in polls with Orban’s Fidesz party, which is looking to win a fourth straight general ballot.