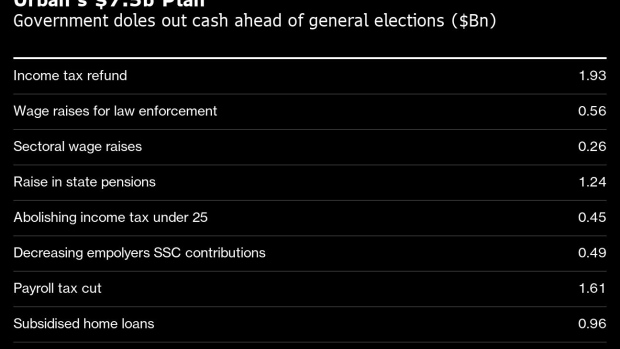 (Bloomberg) -- Hungarian Prime Minister Viktor Orban is ditching a more than decade-long campaign to slash his country’s debt by launching a spending campaign worth $7.5 billion before next year’s closely fought elections.

After chipping away at Hungary’s borrowing load since returning to power in 2010 -- an effort completely undermined by the Covid-19 pandemic -- Orban is arguing that opening the state’s coffers will boost the economic recovery.

But his opponents -- including opposition parties that have their best chance of ousting him from power in a decade -- say he’s trying to buy votes, and even some of his allies have warned of the plan’s economic risks.

The biggest spending item in the package, unveiled by Orban’s chief economic adviser and former deputy central bank Governor Marton Nagy, is a $1.9 billion tax rebate families will receive just before the ballot’s likely date in April. Other steps include raising the minimum wage by a fifth, boosting pensions and eliminating personal income taxes for most people under 25.

“The economy is performing better then we could have imagined in our wildest dreams,” Orban said last week. He was referring to a 17.9% jump in economic growth in the second quarter -- a rebound from a double-digit plunge a year earlier -- to defend the plan to raise pensions.

The plan underscores Orban’s biggest election challenge yet. After repeatedly winning by landslides, his ruling Fidesz party is running neck-and-neck with the united opposition.

Along with the stimulus spending, the government is planning more outlays including the pre-financing of EU-projects -- necessary because the bloc withholding Hungary’s pandemic-aid funding over graft and rule-of-law concerns -- and the equivalent of $5.2 billion to purchase Budapest Airport.

Altogether, that will amount to 16% of gross domestic product in the next six months, according to Nagy. That triggered a warning from central bank Governor Gyorgy Matolcsy, an Orban ally who pleaded for the budget deficit to be trimmed toward 3% of GDP next year instead of the planned 5.9%.

The spending risks overheating the economy and fanning inflation, and possibly a speculative attack against the forint, Matolcsy warned in June. Another Orban ally, Finance Minister Mihaly Varga, has said the next administration will have to cut spending to reduce government debt, which was 77% of GDP at end-July.

“After the Covid crisis, every country engaged in unprecedented stimulus measures, so Hungary didn’t stick out,” said Sandor Jobbagy, an economist at Concorde Securities. “With the increasing number of new measures, that’s about to change.”

Investors have responded by selling the forint, which fell to a six-month low against the euro last week.

The opposition’s candidate to replace Orban, Peter Marki-Zay, is betting that it won’t matter, and has urged voters to pare their economic expectations if he and his allies win.

“We all know Fidesz will hand over the state coffers absolutely empty,” Marki-Zay said last month.