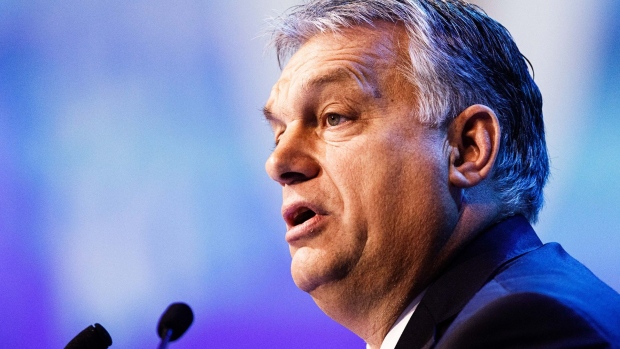 (Bloomberg) -- Hungary told its European Union counterparts that it will cost at least 770 million euros ($810 million) to revamp its oil industry as they wrangle over potential sanctions that would target Russian supplies.

Prime Minister Viktor Orban’s government said 550 million euros were needed to overhaul its refineries to comply with the ban, and another 220 million euros for a pipeline from Croatia, according to people familiar with discussions that have taken place this week between EU ministers and documents seen by Bloomberg. Additional funds may be needed to adapt to a potential price spike resulting from a ban on Russian imports.

Landlocked Hungary is also insisting that any restrictions should focus on sea-borne oil -- and exempt pipelines -- for Budapest to back the ban, according to people. The EU has given no indication of wanting to make that distinction in the sanctions package, which must be approved by all 27 EU states to go forward.

As part of a broader strategy to wean Europe off Russian crude over the next six months and refined fuels by early January, the EU is expected to propose some investments this week to help countries that are most dependent on Russian supplies. It has also offered Hungary and Slovakia until the end of 2024 to comply, and the Czech Republic until June of the same year.

One of the people said they hoped the package will convince Hungary to drop its veto threat and end a week of deadlock over the proposal. Orban has suggested the issue should be discussed by EU leaders, with the next European Council summit scheduled for end-May.

Hungary, whose leader fostered close ties with Moscow before the war, has been seeking technical and investment assurances for the transition away from Russian crude, including about infrastructure in Croatia, the people said.

The proposed sum is a fraction of the 15 billion to 18 billion euros that Hungarian Foreign Minister Peter Szijjarto said would be required to fix Hungary’s energy infrastructure in a tweet on Monday.

Hungary’s stance has drawn scathing criticism from other EU members, according to another European diplomat. Even nations once closely allied to Hungary have begun to express frustration, with the Czech foreign minister calling Orban’s stance “unacceptable” on a tweet on Tuesday.

Separately, Hungary’s foreign minister said on Facebook that the complete modernization of the country’s energy infrastructure would cost 15 billion to 18 billion euros.