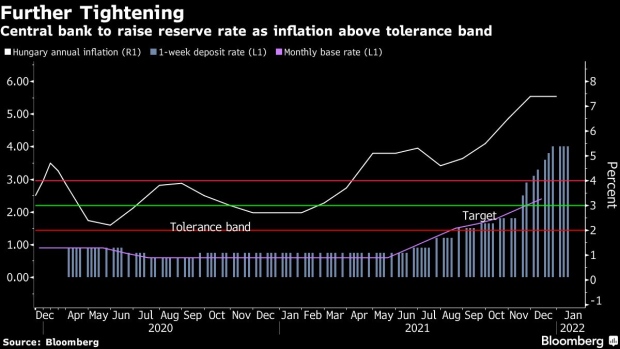 A pedestrian walks in front of the parliament building in Budapest, Hungary, on Tuesday, May 25, 2021. Hungary is moving closer to the European Union’s first major increase in interest rates this year, with policy makers poised to flag the start of a monetary-tightening cycle next month. Photographer: Akos Stiller/Bloomberg , Bloomberg

(Bloomberg) -- Hungary will probably raise its base interest rate for an eighth consecutive month after inflation failed to slow in line with the central bank’s forecasts.

The National Bank of Hungary will boost the required reserve rate to 2.7% from 2.4% on Tuesday, according to the median estimate in a Bloomberg survey. It may also raise the ceiling on its interest-rate corridor, which is currently at 4.4%. That would make way for more monetary tightening in the weekly deposit rate, which is now the key rate and stands at 4%.

Central bankers must continue to sound “squarely hawkish” after the headline inflation rate stayed at a 14-year high of 7.4% in December, matching the prior month despite central bank expectations that it would slow, according to Goldman Sachs.

“We think that incoming economic data will continue to come in on the hawkish side, as external factors remain pro-inflationary and we find that underlying inflationary pressures are broadening in Hungary,” Goldman Sachs economist Kevin Daly said in a Jan. 21 research note.

The required reserve rate, set once a month, has been overtaken by the weekly deposit facility as the central bank’s key interest rate ever since it was raised above the reserve rate in November to fight currency depreciation.

Policy makers have vowed to feed any increase in the reserve rate into the weekly facility, which is set every Thursday. The weekly rate has been unchanged for the past three weeks after seven consecutive hikes helped shore up the forint, making it the best-performing emerging European currency this month.