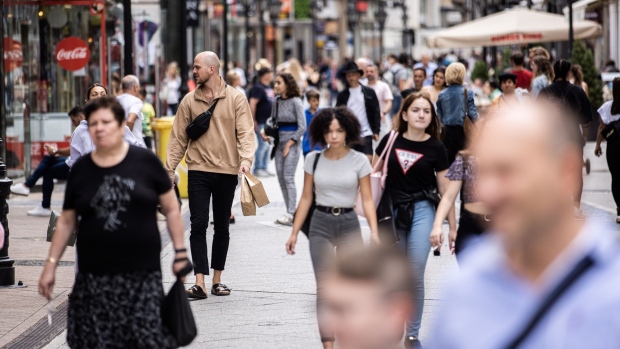 Shoppers on Vaci Street in Budapest, Hungary on Thursday, Aug. 26, 2021. Hungary’s economy shot higher by a record amount in the second quarter as the economy rebounded from its worst-ever three-month contraction during the height of the pandemic. , Bloomberg

Hungary delivered its fourth interest-rate increase in a month to nurture a nascent recovery in the forint.

The central bank in Budapest raised the one-week deposit rate by 20 basis points to 3.10% on Thursday. Economists in a Bloomberg survey were evenly split in predicting a 10 or 20 basis point increase.

The central bank is doubling down on monetary tightening after its inflation-fighting credibility was dented this fall, when it prematurely slowed the pace of rate hikes as peers in the Czech Republic and Poland accelerated theirs and prices continued to surge.

That changed in November, when the central bank raised interest rates three times by a cumulative 110 basis points. The forint has strengthened 1.9% against the euro in the past week, the biggest gain among emerging-market currencies.

In addition to rate hikes, the central bank also plans to wind down its program of government-bond purchases to boost its monetary tightening program, Governor Gyorgy Matolcsy told lawmakers on Wednesday.