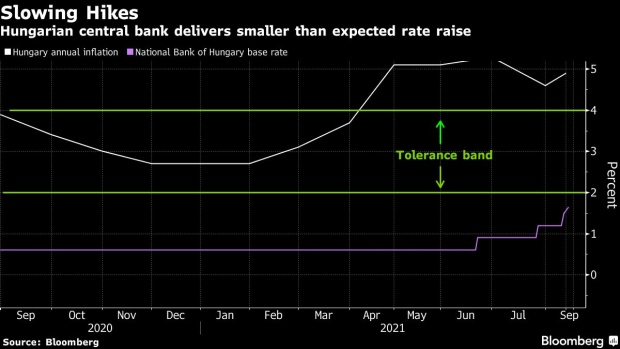 Hungary slowed the European Union’s most aggressive interest-rate-hike campaign and pledged to deliver smaller monthly increases to balance surging inflation with the fallout from the latest wave of the global pandemic.

The central bank increased the benchmark rate by 15 basis points to 1.65%, halving the magnitude of 30 basis-points hikes in each of the past three months. It was also less than the quarter-point increase economists expected.

Rate-setters stuck to their pledge to continue monetary tightening until the inflation outlook stabilized around the central bank’s target. The size of the increase was “indicative” of the monthly steps to come until December, when policy makers will make a quarterly assessment of their impact, Deputy Governor Barnabas Virag said after the decision.

While new inflation forecasts published after the decision confirmed that price pressures were on the rise, the central bank said it was now also vigilant about the threat of a new Covid wave undermining the economic recovery.

“These point toward the need to continue the interest-rate-tightening cycle in smaller, monthly steps,” the Monetary Council said in its post-decision statement.

The events whipsawed the forint, with initial expectations of a bigger rate hike driving the currency stronger and then the smaller increase sending it weaker for a fourth day. The bank’s vow to deliver more hikes in monthly steps boosted the currency once again to trade 0.2% higher at 353.25 per euro by 3:46 p.m. in Budapest.

That pared the forint’s month-to-date loss to 1.3%, the second-biggest drop among central European emerging-market currencies after the Polish zloty. Unlike Hungary and the Czech Republic, Poland has put off monetary tightening out of concern that it may damage its economic recovery.

The monetary-policy adjustment was welcome news for Prime Minister Viktor Orban, an ally of central bank Governor Gyorgy Matolcsy, who is counting on a robust recovery to deliver him a fourth consecutive term in next year’s parliamentary election.

The premier, who’s rolled back democratic freedoms during more than a decade at the helm of the EU member state, confirmed a plan on Monday to raise the minimum wage by a fifth and to pour 600 billion forint ($2 billion) into tax refunds for parents starting in February to help sway the vote in his favor.

The central bank also continued tapering its government bond purchases for a second month, reducing the weekly target to 40 billion forint ($133 million) from 50 billion forint. The new target will be in place until the December review.

In another tightening move, the central bank also pledged to cut forint liquidity by phasing out central bank swap tenders in the local currency.