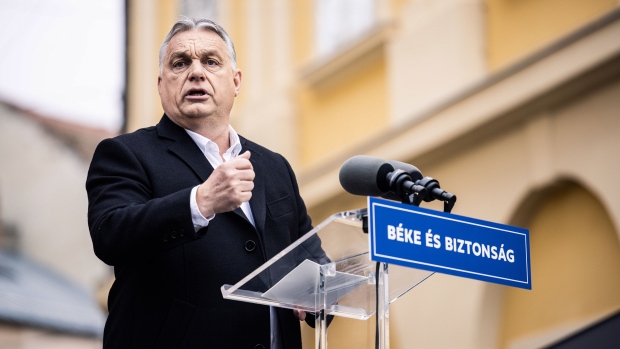 Viktor Orban, Hungary's prime minister, delivers his final campaign speech ahead of the general election, in Szekesfehervar, Hungary, on Friday, April 1, 2022. With Orban tipped to win a fourth consecutive term in Sunday’s general election, stock investors in Hungary are already focusing on how he’ll fix the budget hole created to help his government stay in power. , Bloomberg

(Bloomberg) -- Hungary will force large companies ranging from energy companies to airlines to turn over the bulk of their “extra profit” to two funds that will cover the cost of utility price subsidies as well the development of the armed forces, Prime Minister Viktor Orban said.

The measure, which will be in place for 2022 and 2023, affects banks and “large multinational companies,” including in energy, insurance, large retail, airline and telecommunications companies, Orban said after a cabinet meeting on Wednesday. He said these companies have made “extra profit” during the ongoing war in Ukraine.

It was the first government decision announced under a wartime state of emergency that took effect on Wednesday. Details of the move and its costs will be announced at a government briefing on Thursday, Orban said.

The forint extended losses after Orban’s announcement, dropping 1.8% against the euro.