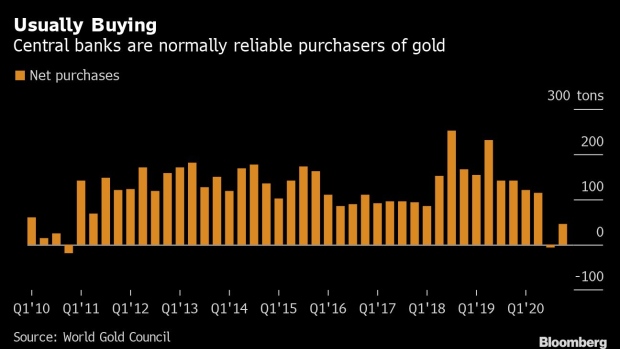 An employee arranges one kilogram gold bars at the Perth Mint Refinery, operated by Gold Corp., in Perth, Australia, on Thursday, Aug. 9, 2018. Demand for coins and minted bars was a little sluggish over the past year as Donald Trump's earlier win in the presidential poll prompted investors to divert funds into stocks, bonds and property, said Perth Mint's Chief Executive Officer Richard Hayes on Aug. 8. , Photographer: Carla Gottgens/Bloomberg

(Bloomberg) -- Hungary tripled its gold reserves in one of the biggest purchases by a central bank in decades -- the latest sign of governments turning to the precious metal as a safeguard of value.

The monetary authority raised its bullion holdings to 94.5 tons last month, it said in an emailed statement. At the same time, the latest data from the World Gold Council showed global central banks were net buyers of gold in February, led by India, which bought 11.2 tons.

Central banks helped underpin for gold prices for most of the last decade, but flipped to net sellers in the third quarter of 2020 as some producing nations cashed in on surging prices driven by investment demand.

Now, with exchange-traded fund holdings of gold in a months-long contraction, the market is looking elsewhere for support.

And as nations look to safeguard their finances in the wake of the pandemic, it’s not just Hungary turning to gold. Polish Central Bank Governor Adam Glapinski said last month the authority may buy at least 100 tons in the coming years to demonstrate the country’s economic strength. Serbia has also been making small but steady purchases since the start of 2019.

On a monthly basis, Hungary’s purchase would be the biggest since June 2019, when Poland bought 94.9 tons, according to WGC data.

“Our expectation remains that central banks will be net purchasers in 2021, but the immediate outlook for central bank demand remains finely balanced,” said Krishan Gopaul, Market Intelligence Manager at the World Gold Council.

Spot gold declined 0.4% to $1,736.01 an ounce by 1:40 p.m. in London. It’s up 1.6% in April after falling for three consecutive months. Silver and platinum both declined and palladium dropped 2.1%. The Bloomberg Dollar Spot Index was little changed.