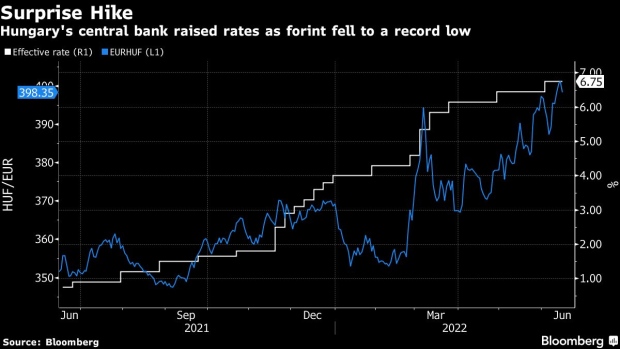 Pedestrians in the Vaci street shopping district in Budapest, Hungary, on Tuesday, June 7, 2022. Inflation in Hungary exceeded 10% for the first time in more than 20 years, putting pressure on the central bank to tighten monetary policy further and prop up the forint. , Bloomberg

(Bloomberg) -- Hungary unexpectedly raised the country’s key interest rate after the forint fell to a record this week.

The one-week deposit rate was increased by 50 basis points to 7.25% on Thursday, the second rate increase in three weeks. All economists in a Bloomberg survey expected no change, in line with central bank messaging to try to keep rate increases to 30 basis points a month.

The forint hit an all-time low on Monday, dropping through 400 per euro for the first time. Investors dumped the currency after the central bank indicated it wanted to slow its tightening pace despite inflation rising to a 21-year high.

Markets were also spooked by a continued standoff with the European Union that’s holding up the disbursement of billions of euros in funding, as well as a government decision to impose windfall taxes to plug budget holes.

The effective interest rate, though still the highest in the EU after aggressive monetary tightening earlier this year, was increasingly out of line with what the market was pricing.

The yield on the 10-year Hungarian government forint bond jumped more than 100 basis points in a week to 8.6% on Wednesday. Meanwhile money-market traders expected 62 basis points in rate-hikes in a month, up 20 basis points compared with a week ago, according to forward rate agreements.