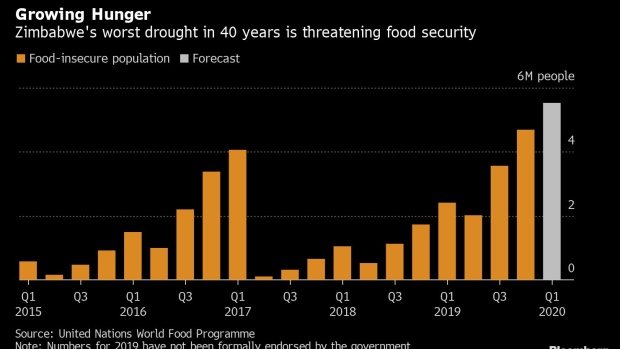 HARARE, ZIMBABWE - AUGUST 01: Corn is bagged at Ivordale Farm on August 1, 2018 outside Harare, Zimbabwe. Commercial farmer Andrew Pascoe runs the 330-hectare farm east of Harare. His father started the business in the 1950’s. The farm grows wheat mostly, maize and Soya Beans, with a dairy herd of 170 cows, a further 280 for beef, plus a piggery with 1200 animals. Before the land reform ‘initiative’, Mr Pascoe owned 1725 Hectares but was left with only 224, only 60 of which that was arable. He currently runs the 60 hectares of his own land, with the rest falling under a ‘joint venture’ program. In 2000 the then President of Zimbabwe, Robert Mugabe, ran a land reform program that aimed to redistribute the farm land mostly owned by white Zimbabweans, to black subsistence farmers. The policy was seen as a disaster, with around 4000 white farmers forcibly removed from their farms, often violently. The policy crippled the agricultural sector and subsequently contributed to the collapse of the economy as those that took over the land lacked the knowledge to run the businesses. (Photo by Dan Kitwood/Getty Images) , Photographer: Dan Kitwood/Getty Images Europe

(Bloomberg) -- Zimbabwe’s government is scrambling to increase corn imports as more than 40% of the population don’t have access to enough food after the worst drought in four decades halved the harvest. Strategic grain reserves have dropped to just a month’s supply, far below the 500,000-ton minimum reserves required. Finance Minister Mthuli Ncube said 110,000 tons of corn, a staple, is needed monthly to “ensure that no one goes hungry,” the Sunday Mail newspaper reported Feb. 9.

--With assistance from Prinesha Naidoo.

To contact the reporter on this story: Ray Ndlovu in Johannesburg at rndlovu1@bloomberg.net

To contact the editors responsible for this story: Gordon Bell at gbell16@bloomberg.net, Rene Vollgraaff, Paul Richardson