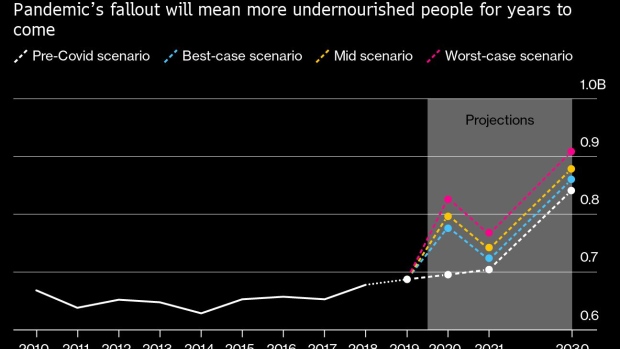 Clockwise from top right: Boxes containing food donations stacked in the Santa Anna church in Barcelona, Spain on May 18, 2020; People queue to recieve food aid from the Barcelona City Council department for immigrants, emigrants and refugees in Barcelona on May 16, 2020; Parcels of food aid await distribution at the Zenzele Counseling Project in Finetown, south of Johannesburg, South Africa on May 7, 2020; People queue to receive parcels of food aid at the Zenzele Counselling Project on May 7, 2020. Photographer: Angel Garcia, Waldo Swiegers/Bloomberg , Photographer: Waldo Swiegers

(Bloomberg) -- The world is hurtling toward an unprecedented hunger crisis.

As many as 132 million more people than previously projected could go hungry in 2020, and this year’s gain may be more than triple any increase this century. The pandemic is upending food supply chains, crippling economies and eroding consumer purchasing power. Some projections show that by the end of the year, Covid-19 will cause more people to die each day from hunger than from virus infections.

What makes the situation unmatched: The massive spike is happening at a time of enormous global food surpluses. And it’s happening in every part of the world, with new levels of food insecurity forecast for countries that used to have relative stability.

In Queens, New York, the lines snaking around a food bank are eight hours long as people wait for a box of supplies that might last them a week, while farmers in California are plowing over lettuce and fruit is rotting on trees in Washington. In Uganda, bananas and tomatoes are piling up in open-air markets, and even nearly give-away prices aren’t low enough for out-of-work buyers. Supplies of rice and meat were left floating at ports earlier this year after logistical jams in the Philippines, China and Nigeria. And in South America, Venezuela is teetering on the brink of famine.

“We’ll see the scars of this crisis for generations,” said Mariana Chilton, director of the Center for Hunger-Free Communities at Drexel University. “In 2120, we’ll still be talking about this crisis.”

Covid-19 has exposed some of the world’s deepest inequalities. It’s also a determining force in who gets to eat and who doesn’t, underscoring global social divides as the richest keep enjoying a breakneck pace of wealth accumulation. Millions of people have been thrown out of work and don’t have enough money to feed their families, despite the trillions in government stimulus that’s helped send global equities to all-time highs.

On top of the economic malaise, lockdowns and broken supply chains have also created a serious problem for food distribution. The sudden shift away from restaurant eating, which in places like the U.S. used to account for more than half of dining, means farmers have been dumping milk and smashing eggs, with no easy means to redirect their production to either grocery stores or those in need.

Don Cameron of Terranova Ranch in California took a hit of about $55,000 this year on his cabbage crop. Almost half the loss -- $24,000 -- came because Cameron decided to donate to local food banks after demand from his usual customers dried up. He had to pay for the labor needed to do the harvesting and truck loading. He even needed to cover the cost of some bins and pallets to get supplies moved. It would’ve been a lot cheaper to just let the crops rot in the field.

“We know other parts of the country need what we have here. But the infrastructure has not been set up, as far as I’m aware, to allow that. There are times when there is food available and it’s because of logistics that it doesn’t find a home,” said Cameron, who still ended up destroying about 50,000 tons of the crop since nearby food banks “can only take so much cabbage.”

Initial United Nations forecasts show that in a worst-case scenario, about a tenth of the world’s population won’t have enough to eat this year. The impact will go beyond just hunger as millions more are also likely to experience other forms of food insecurity, including not being able to afford healthy diets, which can lead to malnutrition and obesity.

The effects will be long lasting. Even in its best-case projections, the UN predicts that hunger will be greater over the next decade than forecast before the pandemic. By 2030, the number of undernourished people could reach as high as 909 million, compared with a pre-Covid scenario of about 841 million.

The current crisis is one of the “rarest of times” with both physical and economic limitations to access food, said Arif Husain, chief economist with the UN’s World Food Programme.

By the end of the year, as many as 12,000 people could die a day from hunger linked to Covid-19, potentially more than those perishing from the virus itself, charity Oxfam International estimates. That’s calculated based on a more than 80% jump for those facing crisis-level hunger.

Projections for increased malnutrition also have a profound human toll. It can weaken the immune system, limit mobility and even impair brain functioning. Children who experience malnutrition early in life can see its impact well into adulthood.

“Even the mildest forms of food insecurity have lifelong consequences,” said Chilton of the Center for Hunger-Free Communities. Problems with physical and cognitive development in children and adolescents can hamper the chances of staying in school or getting a job, continuing a cycle of poverty.

Government programs, food charities and aid organizations have mobilized across the globe, but the need far outstrips their reach. The UN’s WFP aid group alone needs a record $13 billion for the year to deliver food in 83 countries, and at the start of the second half faced a shortfall of $4.9 billion to meet the goal.

Hunger can spark seismic shifts in the political landscape. Going back to the days of the French Revolution, food insecurity has sent people into the streets demanding better conditions. Surging food prices were part of the economic crisis that helped fuel recent protests in Lebanon and demonstrations over shortages erupted in Chile earlier this year.

Deep-seated inequalities along gender and racial lines also correspond to disproportionate impacts from hunger. In the U.S., for example, Black Americans are two-and-a half times as likely as their White counterparts to have low or very low access to enough food for an active and healthy life. Globally, women are 10% more likely to be food insecure than men.

“We have to make sure that we’re addressing gender inequality -- if the international community is not doing that, we will fail to avoid the worst of the hunger crisis,” said Tonya Rawe, a director at hunger relief and advocacy group Care.

Data from the UN show that throughout the world, there are more than enough calories available to meet every individual’s needs. But even in the U.S., the richest country in the world, almost 2% of the population, or more than 5 million people, can’t afford a healthy diet (one that protects against all forms of malnutrition). More than 3 million Americans can’t afford to even meet basic energy needs. In India, 78% of people can’t afford healthy diets -- that’s more than 1 billion people. Those figures don’t even take into account the pandemic and its lasting effects.

Costs and logistics prevent food surpluses from being easily shifted to areas without. That’s the dilemma faced by potato farmers in Belgium. When freezers filled during the pandemic, most of their spuds weren’t fit for food banks or grocers. The main variety that’s grown to meet demand from places like the country’s famous fry shops get black and blue spots after just a few days, said Romain Cools of industry group Belgapom. Sales to supermarkets quickly stopped after complaints, and a bulk of the region’s 750,000-ton surplus was instead used for animal feed or biogas.

“It’s hard to take surplus milk in Wisconsin and get it to people in Malawi -- it’s just not realistic or practical,” said William Moseley, a geography professor at Macalester College who serves on a global food-security panel.

Despite the abundant supplies, food is growing more expensive because of bungled supply chains and currency devaluations. Costs are up in parts of Africa and the Middle East and they’re also rising in developed countries, with Europeans and Americans paying extra to stock their fridges.

Even within major food-producing countries, being able to afford groceries is never a given.

Latin America, an agriculturally rich region that exports food to the world, is leading this year’s surge in hunger, according to the UN’s WFP.

In Brazil, a huge cash-distribution program has helped millions and driven poverty rates to historic lows. But that hasn’t met all the need. In the country’s northeast, Eder Saulo de Melo worked as a guard at parties until the virus arrived. With events suspended, he hasn’t been paid in months. He’s been locked out of the emergency cash program and the 130 reais ($25) he gets in regular monthly aid goes to energy, water and gas bills, leaving little to feed his three children. Baskets of non-perishables, vegetables, bread and eggs from a non-governmental organization are the family’s main sustenance.

“I needed to stop buying fruit and meat,” he said. “Instead of a slice of chicken, I buy offal to make a soup.”

The hunger estimates for this year have a “high degree of uncertainty,” and the disease’s devastation is largely unknown, the UN cautioned about its figures.

The UN’s Food and Agriculture Organization began tracking global hunger in the mid-1970s. Current data can’t be compared past 2000 given revisions in methodology, said Carlo Cafiero, team leader for food security statistics. But general trends can be observed, and they show that hunger moved lower over the past several decades until a recent reversal started in 2015, spurred by by climate change and conflicts.

The increases in the last few years are nothing like what is forecast now -- even the best-case of the UN’s tentative scenarios would see hunger surge in 2020 more than the past five years combined. And when looking at other notable periods of need in the world, such as the Great Depression, the level of food surplus that exists today is without comparison thanks to the advent of modern agriculture, which has seen crop yields explode.

“It’s impossible to look at the situation and not think we have a problem,” said Nate Mook, chief executive officer of food-relief group World Central Kitchen. “This pandemic has really exposed the cracks in the system and where it starts to break down.”