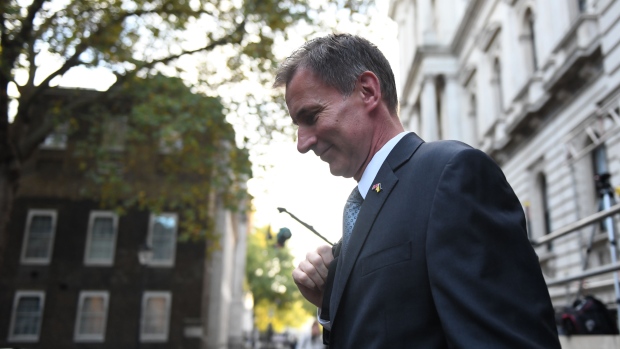 (Bloomberg) -- Chancellor of the Exchequer Jeremy Hunt contested the UK fiscal watchdog’s projection that Brexit will reduce the size of the economy, saying the split from the European Union could actually make Britain richer.

“What I don’t accept is that the long-term impact of that decision will be to make us poorer,” Hunt said in an interview with Sky News on Thursday, when asked about the Office for Budget Responsibility’s forecast of a 4% Brexit hit relative to staying in the EU. “I don’t accept the 4%.”

Hunt said the projection doesn’t account for the potential benefits of regulatory reforms that the British government plans to deliver, citing areas such as new medicines and artificial intelligence. His comments come at a time of growing evidence of the economic damage from Brexit -- through higher trade barriers with the UK’s largest trading partner -- and as Britons show signs of regret.

“There are big opportunities for us to become much more wealthy than we would otherwise have been,” HUnt said, adding his aim is to make Britain the next Silicon Valley. “Being able to set your own regulations means that you can do some of those things in a way that wouldn’t have been possible.”

Since the Brexit vote in 2016, the UK government is yet to deliver major legislative change with significant benefits for businesses. Instead, companies have had to grapple with higher paperwork costs on trade, a tighter labor market spurred by a reduction in EU migration and a weaker pound increasing import costs. Brexit has also had a political cost of aggravating tensions in Northern Ireland and hurting diplomatic relations with the EU.

This week, Hunt said he wants to stick with the zero-tariff, zero-quota trade agreement with the EU signed by Boris Johnson, and rejected reports that the UK is considering a closer, Swiss-style relationship with the bloc.

“This is not the right deal for the UK,” Hunt told Sky when asked about the EU’s relationship with Switzerland, which receives greater market access in exchange for payments to the EU budget and other concessions. “We are going to pursue different regulations as an independent, sovereign country.”