Forty-eight people would end up dying, and the Los Angeles Police Department’s narcotics unit was in a race against time.

Their mission: Bust illegal marijuana dispensaries, get their THC cartridges tested for a deadly contaminant and do it before more people came down with the fatal lung illness.

Meanwhile, patients in Utah were reluctant to come forward because possession of marijuana is against the law there. Public-health officials said that slowed their effort to track down the cause of what has become 115 cases of the vape-induced lung condition in Utah.

The patchwork of marijuana laws in the U.S. made it tougher to coordinate reaction to the deadly vapes, some of which were purchased in Los Angeles and used in Salt Lake City. One person in Utah died.

“Figuring out a way to respond amid a very complex regulatory and legal environment at the state and sub-state level is just difficult,” said Greg Midgette, a criminology and criminal justice professor at the University of Maryland.

The federal government considers marijuana possession against the law. Some states do, too. At the same time, 11 states have approved smoking pot for fun and more than 30 allow it as medicine. The confusing and contradictory legal landscape makes important public-health work harder than it could be, thwarts law enforcement and threatens lives, legal and public-health experts said.

For LAPD Detective Nick Vascones, the alarm went off in early September. That’s when the U.S. Centers for Disease Control and Prevention first issued the warning that THC vapes might be the cause of a mysterious lung illness that was popping up around the country. THC is the active ingredient in marijuana. 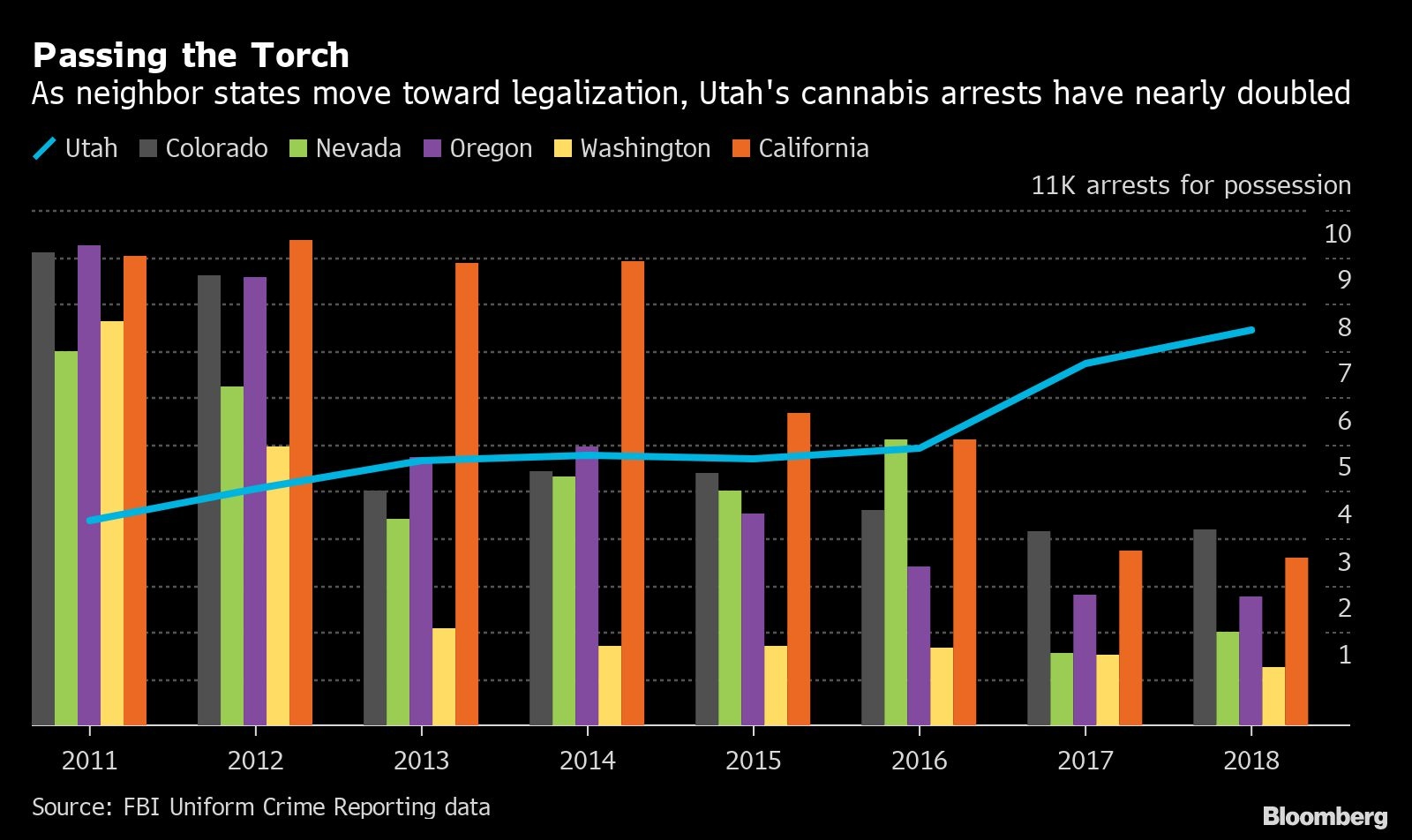 “All of our attention went to this,” said Vascones, who supervises a narcotics division in the 77th Street area of South Los Angeles. “This has been taking up a lot of our time in the last four months.”

Urgency came from people like Dixie Harris, a pulmonologist at Intermountain Healthcare, Utah’s biggest provider. The outbreak of the lung ailment had Harris and a team of health officials scrambling for a response, with as many as 50 people joining conference calls to plot strategy. Utah, which ranks 30th in population among states, found itself in the top five nationally when it came to the mysterious illness.

But the people suffering from lung problems weren’t always talkative.

“They’re not really wanting to come forward because it’s illegal here, so it’s hard to get those histories,” she said.

Sleuthing by Harris and her colleagues unearthed the origins of the offending vapes that were sickening people in Utah: Las Vegas, Colorado and California.

That left police like Vascones to shut down the illegal vape dispensaries 700 miles (1,100 kilometers) away. After the CDC officially identified Vitamin E acetate oil, a substance used to dilute the THC in the cartridges, as the culprit on Nov. 8, the cops’ mission gained importance.

“It made us a little bit more hungry,” Vascones said.

Vascones said his unit was able to break up about three-quarters of the illegal dispensaries in his jurisdiction this year, but state law, which makes it a misdemeanor rather than a felony to sell such products without a permit, meant that the perpetrators were freed shortly after arrest. Many of them went right back to dealing vapes, he said.

As frustrating as it may be, the mission continues for the LAPD. If a shop reopens, Vascones said his division breaks it up a second time. According to state law, it’s all the narcotics unit can do, Vascones said.

Since California’s black market in cannabis is so well-established that it competes with legal sellers, it may be up to public-health officials to warn potential victims off hazardous products and hope they self-police, said Michael Siegel, a public-health professor at Boston University.

“You can’t block every internet site and find out who’s selling what,” Siegel said. “You can’t examine every package that’s being sent across state lines. You can’t locate every drug dealer who in their basement has a lab where they’re putting together counterfeit cartridges.”