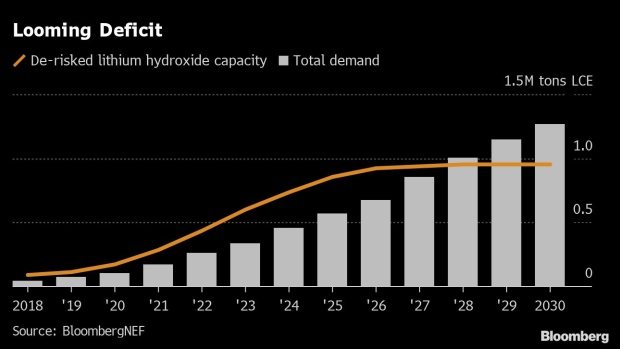 (Bloomberg) -- At a lavish lunch this month in Buenos Aires, 400 mining executives and government officials gathered to toast Argentina’s natural resource riches amid the kind of corporate giddiness not seen since the country’s first attempt to develop its shale oil resources a decade ago.

The attraction for investors this time around is Argentina’s lithium. There’s a looming shortage of the rare metal, a key raw material in the batteries used in electric vehicles. Elon Musk signaled Tesla Inc. might get involved in mining to secure supplies. Chinese and US companies engaged in bidding wars for Argentina’s lithium resources, while Rio Tinto Group and Zijin Mining Group Co. are pouring more than a billion dollars into the country.

“If Argentina didn’t come through, it’d be almost impossible for the lithium market to stay well-supplied,”  said Michael Widmer, head of metals research at Bank of America.

Argentina has 13 lithium projects in the pipeline, more than any other country. The US has 10.

The world needs lithium supplies to grow fivefold by the end of the decade to meet projected demand as the electric-vehicle revolution gets into full swing, according to BloombergNEF. It could be Argentina's last shot at moving beyond its traditional offerings of soybeans, grains and beef to emerge as a global heavyweight in a new sector.

The country has 19 million metric tons of lithium resources that haven't yet been mined, twice as much as Chile. But Argentina has long struggled to lure the consistent, hefty international capital flows needed for mass development of oil, natural gas, gold and silver locked underground.

Patagonian shale formation Vaca Muerta is perhaps the best example. A decade ago, it was all buzz and promise. There was a special exemption from capital controls that attracted Chevron Corp. But the trickle never became a flood: Argentina's broader woes and interventions in fuel markets kept development in check.

Now, the world’s largest lithium producer, Albemarle Corp., plans to restart exploration in the Salar de Antofalla in Argentina, a more remote and less developed area than Australia and Chile, where the company has been mining so far.

“We don’t always get to choose where our resources are. Now, the EV market is accelerating and demand is really growing, we need to develop that next resource,” said Kent Masters, chief executive of Albemarle.

It’s a tall order. A two-year price slump through the middle of 2020 had put some new mines on hold and had driven investors away, meaning that additional supply isn’t growing fast enough now.

“It’s more mature on the demand side now. You can bank on it more,” said Jon Lamb, portfolio manager at a metals and mining investment firm Orion Resource Partners. Consultancy Benchmark Mineral Intelligence expects the lithium market to grow to $40 billion by 2030 from just $1.2 billion in 2015.

Posco Holdings Inc., one of the largest steelmakers, is investing $830 million in a lithium hydroxide plant in Argentina.

Such investment is crucial, considering that Australia and Chile’s dominance in lithium is set to fade. While Australia and Chile account for 76% of output, their share in the project pipeline is only around 34%, BofA’s Widmer said in a note.

Argentina will overtake Chile in lithium production around 2027, according to Daisy Jennings-Gray, senior analyst at Benchmark Mineral Intelligence, which advises governments on critical minerals. Lithium Americas Corp. and Ganfeng Lithium Co.’s Cauchari-Olaroz is likely to be the first new project to produce significant volumes in 2023.

Argentina, Chile and Bolivia -- the so-called lithium triangle -- account for more than half of global resources, and are looking to cooperate on ways to move beyond mining the metal into producing higher-value products.

“The three countries have different perspectives on how to produce the lithium, but we have a shared perspective on what to do next with it,” Argentina Mining Undersecretary Fernanda Avila said. “We’re working together to develop new technologies and techniques to go further in the value chain.”

With history of capital controls, which Argentina uses to protect its foreign reserves, the country fights the perception of being “like ‘Hotel California’. You can come in anytime you want, but you can never leave,” said Andy Bowering of American Lithium Corp., which has a project in Peru.

Argentina makes companies turn export revenues into pesos. It then stops them from freely accessing dollars or pounds again and moving them abroad. For instance, several commodities companies including top shale oil driller YPF SA had to re-finance dollar bonds because Argentina won't let it buy enough greenbacks to service debt. But with the country stuck for ways to grow the economy, especially in the mining sector, it recently created capital-control loopholes for big investors.