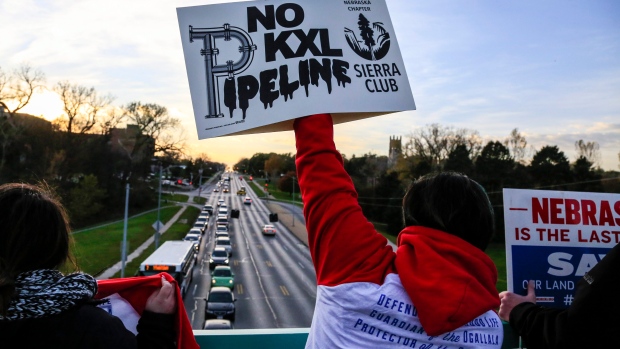 It was this time last year when hopes for the Keystone XL pipeline were revived.

Within days of U.S. President Donald Trump's inauguration, he signed an executive order to review not one, but two controversial pipeline projects: TransCanada's Keystone XL and the Dakota Access pipeline. Then on Mar. 24, TransCanada finally received a presidential permit to proceed with its long delayed pipeline, something once considered dead in the water after former President Barack Obama refused to grant it.

“Obama turned that into a significant regulatory process,” said Lawrence Smith, a regulatory lawyer with Bennett Jones who has provided counsel to the National Energy Board and Canadian government on pipeline issues. “Trump just swept that all away and approved it.”

Even when TransCanada (TRP.TO) chief executive Russ Girling noted there was still work to do in acquiring necessary permits from Nebraska, Trump’s response emphasized his need for speed on the issue: “Nebraska? I'll call Nebraska,” the President said in the Oval Office when he approved Keystone in March last year.

It looked like the new commander-in-chief meant business, and his efforts to clear the way for Keystone XL were met with fanfare by the energy sector. Yet now, as the president enters his second year in office, it’s unclear if Trump ever made that call to Nebraska – and whether the pipeline project will finally proceed still remains in question.

Keystone XL remains important for Canada and especially Alberta, which continues to struggle to get its landlocked oil reserves to market. The proposed $8-billion pipeline would bring 830,000 barrels per day of crude from the Canadian oil sands down to the state of Nebraska and onto an existing pipeline network that feeds U.S. refineries and ports along the Gulf of Mexico.

The project got a big boost this week: TransCanada announced Thursday it has secured approximately 500,000 barrels a day of firm, 20-year commitments on Keystone XL during its open season. This means it has received 60 per cent of its planned capacity, or enough shipping commitments “positioning the proposed project to proceed” with early construction expected to begin in 2019.

Still, TransCanada stopped short of announcing an investment decision. The company had already pushed back its December decision deadline amid legal obstacles to the pipeline’s route through Nebraska.

“Keystone XL has strong support and remains an important piece of North American infrastructure,” TransCanada spokesperson Matthew John said in a statement to BNN. “We continue to evaluate the project and will make project-related announcements when we have completed those evaluations.”

In November, the Nebraska Public Service Commission approved an alternative route to TransCanada’s preferred route, which has led to even more complications for the project. The alternative path is eight kilometres longer, more costly and hasn’t been studied and scrutinized to the same level as the company’s top choice.

Since the decision, TransCanada has been working to engage a whole new set of landowners along the approved alternative pipeline route, trying to now get them on board with Keystone XL.

It’s also re-energized opposition to the project. While Keystone XL has long been a symbol in the bigger battle against Canadian oil sands production, the NPSC’s decision has emboldened environmental groups, Aboriginal communities and landowners along the route, who see it as a threat to groundwater and property rights.

“They’re looking for everything and anything to grab on to for their cause,” said Tim Gramatovich, chief investment officer and co-founder of Peritus Asset Management.

An appeal to Nebraska’s decision has already been filed by a group of landowners on Dec. 27, 2017.

Although Keystone XL has received approval from the Canadian and U.S. governments as well as all three states it would cross, Rafi Tahmazian, senior portfolio manager and director at Canoe Financial, says protestors and activists will continue to pose some of the project’s largest challenges.

“[Trump’s] approved it, but we know there’s still going to be a lot of noise and a lot of special interest saying it’s not going to happen whether it’s approved or not,” Tahmazian said.

“There are a lot of hurdles still to come.”

Despite the challenges that lie ahead for Keystone XL to proceed, Trump’s hands may be tied on the issue for now. Granting the regulatory permit that he had promised was the only move he could make, according to Smith.

“As far as Keystone, he’s done all that he can, apart from lending some moral support to TransCanada apropos of Nebraska,” Smith said.

Gramatovich is confident, however, that energy politics will drive this project to completion – putting more pressure on Trump.

“I think politically, one can argue about how many jobs this will create, but at end of day, the refineries on the U.S. Gulf Coast need the heavy crudes. Their supplies are pretty suspect when you consider their other sources," Gramatovich said, pointing to the similar crude blends coming to the Gulf Coast refineries from Mexico or Venezuela.

"There will be political pressure that they will get this done.”