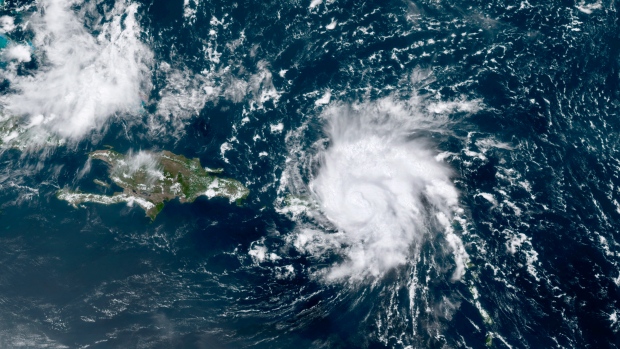 This satellite image taken Wednesday, Aug. 28, 209, at 17:20 UTC and provided by National Oceanic and Atmospheric Administration (NOAA), shows Dorian, a Category 1 hurricane, crossing over the U.S. and British Virgin Islands. Forecasters say it could grow to Category 3 status as it nears the U.S. mainland as early as the weekend. , (NOAA via AP)

Dorian is gathering force as it aims to become the first major hurricane to slam into the Florida’s east coast in 15 years, with winds of at least 115 miles per hour and drenching rains.

The hurricane’s center was located about 425 miles (685 kilometers) southeast of the Bahamas at 5 a.m. New York time, moving northwest at 13 miles per hour, according to the U.S. National Hurricane Center. The storm is carrying maximum sustained winds of about 85 mph after racing past Puerto Rico and the U.S. Virgin Islands on Wednesday.

Dorian is expected to stay over the water as it barrels toward Florida, gaining strength and spurring growing concern from Florida residents, vacationers and citrus farmers. Governor Ron DeSantis has declared a state of emergency, and President Donald Trump urged residents to follow state and federal instructions. It’s too early to say where the storm may make landfall when it arrives over the Labor Day weekend, forecasters agreed.

“Really anybody from Miami to Myrtle Beach has to be on guard for this,” said Jake Sojda, a meteorologist with AccuWeather Inc. in State College, Pennsylvania. The error rate for storm projections five days out is usually about 200 miles, he said.

“We’re pretty confident that sometime this weekend, maybe even by Friday night, it becomes a Category 3, major hurricane,” said Rob Miller, also at AccuWeather. “It is not out of the question that at landfall it is a Category 4,” which would carry winds of 130 mph to 156 mph. 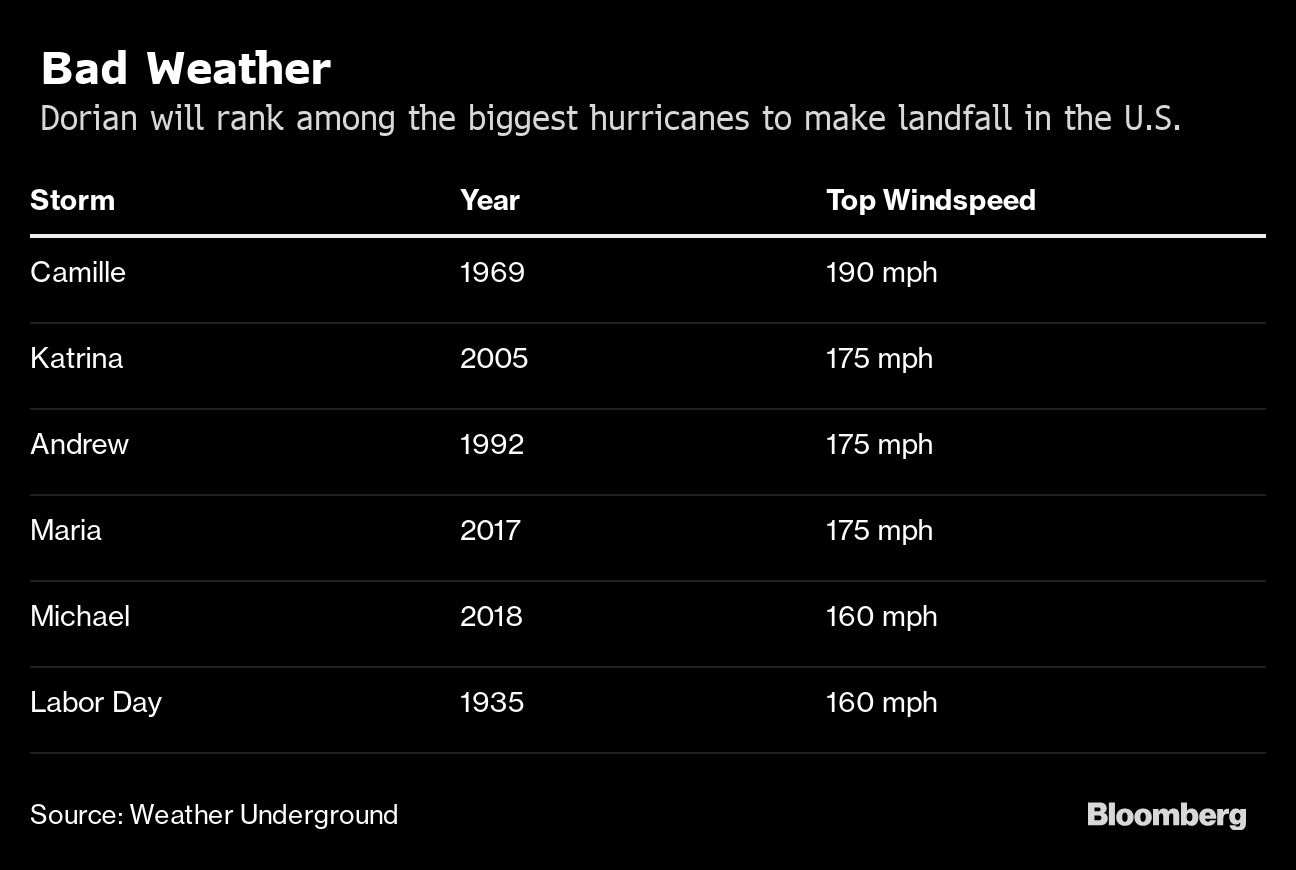 Dorian could come ashore near Melbourne, Florida, late Sunday or early Monday, but anywhere between West Palm Beach in the south to Jacksonville in the north could get hit, according to Miller. ‘There is still a lot of uncertainty in terms of the track,” he said.

Dorian is somewhat compact, which could keep wind damage confined, Miller said. However, the storm is expected to drop heavy rain over a wide area raising the flood risk. This would be made worse, he said, if the storm slows down.

The northwest Bahamas and coastal sections of the southeast U.S. are expected to see four to eight inches of rain this weekend and into early next week. Isolated rainfall accumulations of 12 inches are also expected, the hurricane center reported, adding that the rainfall may cause life-threatening flash floods.

The last major hurricane to make landfall along the central coast of Florida carrying winds of 111 mph or more was Jeanne in 2004, said Phil Klotzbach, a hurricane researcher with Colorado State University. Dorian is threatening to become the strongest storm to hit anywhere in Florida since Hurricane Michael landed last year as a category 5 storm causing about $10 billion in insured losses.

If Dorian moves into central Florida, citrus growers “should be concerned because the event would bring a lot of rain and probably strong winds,” said Donald Keeney, senior agricultural meteorologist at Gaithersburg, Maryland-based Maxar. The state’s biggest producing counties include Hendry, DeSoto, Polk and Highlands, all located in that region.

Dan Richey, president and chief executive officer at Riverfront Packing Co. in Vero Beach, has reasons to be concerned. His company, which has 4,000 acres planted mostly with grapefruit, oranges and lemons, was last hit badly in 2004 by hurricanes Jeanne and Frances, when the company lost between 60% to 70% of the crop.

While Dorian is a smaller storm, “if it follows the current path, it will be quite devastating and impactful to the entire industry,” he said in a telephone interview. His company is draining fields in preparation for a deluge, he said. Orange-juice futures in New York rose to a seven-week high as crop concerns escalated.

SeaWorld Entertainment Inc. said it has no plans to close its central Florida theme parks at this point. Walt Disney Co. didn’t immediately reply to a request for comment.

Carnival Corp., the world’s largest cruise line, has changed the schedules of four of its ships, steering clear of San Juan, for example, as well as the Dominican Republic.

Royal Caribbean Cruises Ltd., the industry’s second-largest player, has closed its recently remodeled private island in the Bahamas, CocoCay, and won’t reopen it until Sept. 4. The company said over 400 people work on the island, and they need to go home to secure their homes and take care of their families. Passengers who prepaid for activities on that island will get refunds.