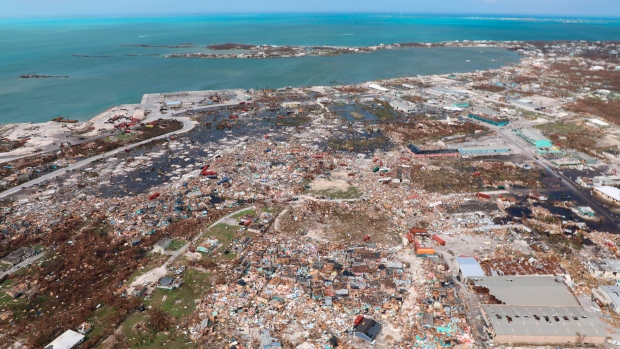 Hurricane Dorian, which pummeled the Bahamas, could cost the country US$7 billion in insured and uninsured losses, according to an estimate from risk modeler Karen Clark & Co.

The preliminary estimate combines damage to commercial, residential and industrial properties as well as business-interruption expenses, the company said in a report Thursday. The figure doesn’t include vehicle losses or damage to infrastructure.

Dorian swept over the Bahamas as a Category 5 storm, killing at least 20 people on Abaco Island, and is bearing down on the Carolinas as a Category 3. Most of the damage in the Bahamas occurred on Abaco and Grand Bahama, according to Karen Clark. Analysts at UBS Group AG estimate the storm will cause as much as US$10 billion in insured losses, lower than the bank’s initial forecast of US$25 billion.

“Dorian will go down in history as the worst catastrophe in this region, not only due to the highest recorded wind speed in the North Atlantic but also because the storm stalled over Abaco and Grand Bahama Island for over 24 hours,” Karen Clark said in its report.

--With assistance from Will Hadfield