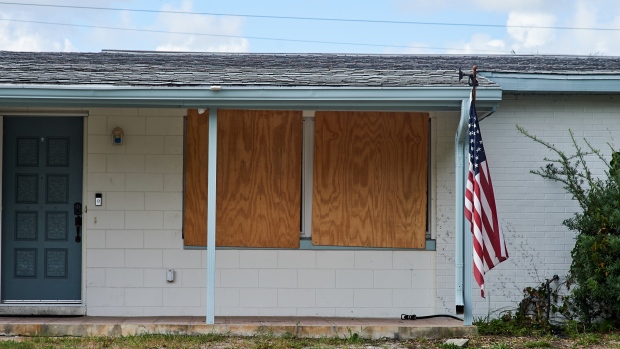 A house with windows protected by plywood stands ahead of Hurricane Dorian in Cocoa Beach, Florida, U.S., on Thursday, Aug. 29, 2019. , Zack Wittman/Bloomberg

Hurricane Dorian’s course turned slightly south, with the storm now expected to make landfall near Jupiter, Florida, on Monday as a Category 4, with winds reaching 140 miles per hour.

The center of the storm’s “cone of uncertainty” now points to Jupiter, about 25 miles (40 kilometers) north of President Donald Trump’s Mar-a-Lago resort. Trump canceled a planned trip to Poland this weekend because of the storm. The hurricane’s center was located about 260 miles east-northeast of the southeastern Bahamas as of 5 a.m. New York time, moving northwest with maximum sustained winds of about 105 miles per hour, according to the U.S. National Hurricane Center.

“There is an increasing likelihood of a prolonged period of hazardous weather conditions that could last for a couple of days in parts of Florida early next week,” the center said in its latest advisory.

Dorian is expected to become a major hurricane -- meaning at least a Category 3 on the Saffir-Simpson scale -- later today. It will approach the northwestern Bahamas on Saturday, and move near or over parts of that region on Sunday, the center reported.

Exact landfall is still too early to say precisely -- Florida’s governor on Thursday expanded a state of emergency to all 67 counties from 26, citing the “uncertain projected path.” The storm could impact counties with average insured values of US$53 billion, according to Bloomberg Intelligence, while Chuck Watson, a disaster modeler with Enki Research, sees losses in the US$10 billion range. Orange juice prices surged this week on estimates that about 60 per cent of the state’s main orange-growing region could be affected.

Some gasoline stations were starting to run empty as residents prepared for the storm and the city of Miami said it was removing dockless scooters from its streets to avoid them becoming projectiles in high winds.

One key concern is if the storm slows as it hits the coast, said Ryan Truchelut, president of Weather Tiger LLC in Tallahassee, Florida. This could raise the risk of flooding rains, he said.

“Somewhere is going to get destructive winds that are capable of doing structural damage,” Truchelut said by telephone. “The surge along the right of the track is going to be 9 to 12 feet in some places.”

“Dorian may land as a weaker storm in an area with lower insured values than 2017’s Hurricane Irma. Insurers are already seeing pricing momentum, which could accelerate further in the event of a US$10 billion-plus storm loss.”

Dorian is threatening to become the strongest storm to hit anywhere in Florida since Hurricane Michael landed last year as a category 5 storm causing about US$10 billion in insured losses.

The last major hurricane to make landfall along the central coast of Florida carrying winds of 111 mph or more was Jeanne in 2004, said Phil Klotzbach, a hurricane researcher with Colorado State University.