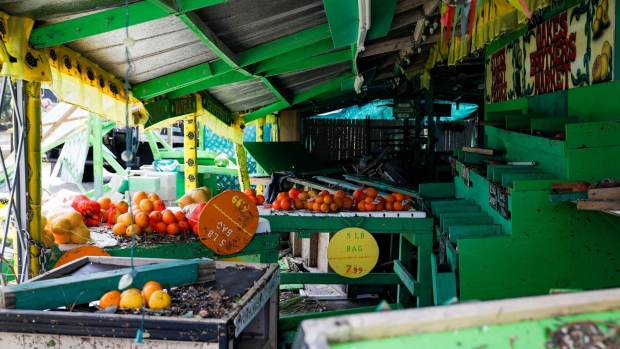 A damaged produce store following Hurricane Ian in Fort Myers, Florida, US, on Thursday, Sept. 29, 2022. Ian, now a hurricane again, is threatening to carve a new path of destruction through South Carolina Friday when it roars ashore north of Charleston. , Bloomberg

Florida’s farmers and ranchers are facing widespread destruction from Hurricane Ian that threatens to curb supplies of fruit and vegetables in a region that is critical to America’s food supplies. The Sunshine State is a key source of vegetables, livestock, dairy and fruit -- most notably the oranges it’s famous for. And they’ve all been devastated by the storm, the Florida Farm Bureau said by email.

Ian struck just as the US heads into cooler autumn months, disrupting planting at a time when food inflation already is soaring. Florida is the top US supplier of fruits and vegetables in fall and winter months and the country’s second-biggest producer overall after California, which is battling an unprecedented water crisis that’s left hundreds of thousands of farmland unplanted this year.

It grows 500,000 acres of fresh produce a year, generating about $20 billion in total sales. There are more than 6,400 fruit and vegetable farms with a total of 139,000 workers. It also represents $516 million in fresh produce and tree nut exports.

Florida is starting the process of assessing the full extent of damage left in the hurricane’s wake. Flooding is at the top of farmers’ concerns.

“If you can’t get the water out in the first 72 hours, things tend to get pretty grim,” said Matt Joyner, CEO of Florida Citrus Mutual, who represents over 25,000 growers in the areas most affected by the hurricane. Orange trees already have suffered significant damage with winds blowing fruits off trees, especially in the citrus-belt counties of DeSoto, Hardee and Highlands, Joyner said.

While the full extent of the state’s agriculture losses aren’t yet known, it has become clear that in areas of Florida’s citrus belt, “there has been significant fruit dropped from the trees,” according to the bureau. “Fall vegetables once rooted are now lost.”

Farmers also are facing weeks of rebuilding in the face of dire conditions. Many in the industry are facing power outages, widespread flooding and the inability to access fields, groves and packinghouses, said Christina Morton, director of communications for the Florida Fruit and Vegetable Association.

Along with the challenge of assessing losses, there’s the issue of having to go back and rework cropland.

“The whole infrastructure has been impacted. From the planting to the harvesting -- just the logistics to get to point A from point B --it’s going to take weeks for us to be able to recover,” said Cathy Burns, CEO of the International Fresh Produce Association.

Jim Handley, executive vice president of the association, said Thursday by phone from Kissimmee that many ranchers were able to move animals to higher ground before the hurricane made landfall, but one operation lost two newborn calves. “Ranches are kind of wrecked,” he said.

The key for animals now is for water on pastures to recede so they can resume feeding before hunger becomes critical. Handley said ranchers from neighboring states will bring in hay and other supplemental feed to help.

In addition to farm damage still being assessed, bee colonies are under threat, potentially impacting crops like blueberries, almonds and squash beyond the hurricane’s path. Roughly 400,000 colonies are at risk, with many already known to be submerged in water and in distress, said Jamie Ellis, professor of Entomology at the University of Florida. That’s about half of all the bee colonies in Florida and 16% of a total 2.5 million across the nation.