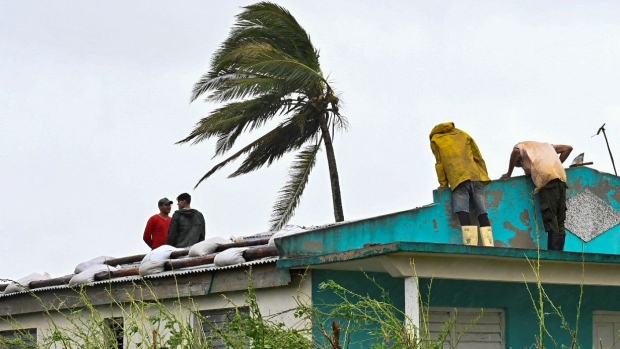 (Bloomberg) -- Cuba was hit by a nationwide blackout Tuesday after Hurricane Ian knocked out the country’s ailing energy grid as it tore across the island en route to Florida.

Cuba’s National Electric System was producing no electricity as of 8:30 p.m. local time, according to state media outlet Granma.

Ian ripped off roofs, uprooted trees and flooded streets after it made landfall on the communist island as a Category 3 storm. Much of the worst damage was concentrated in the westernmost province of Pinar del Rio, the heartland of the country’s tobacco industry.

The damage hits an economy that was already struggling with shortages of basic goods, frequent blackouts, annual inflation of around 30%, all likely to be aggravated by a massive fire last month at the country’s only transshipment point for crude.

The storm moved north from the island Tuesday afternoon as it headed toward Florida with winds nearing 120 mph.

Electricity is expected to be restored gradually overnight, Granma reported, citing the Energy Ministry. In a series of tweets, the ministry said it would take “much precision” to restore the grid. The island had already been suffering frequent blackouts as aging power plants have gone down and fuel costs have soared.

(Adds comments from Energy Ministry in final paragraph. An earlier version of this story corrected the month of the fuel depot fire in the 5th paragraph.)