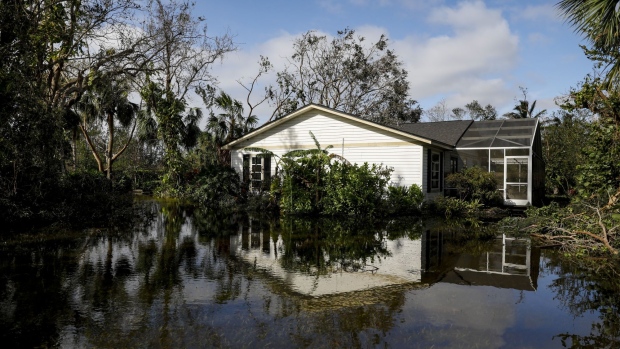 A flooded house following Hurricane Ian in Fort Myers, Florida, US, on Thursday, Sept. 29, 2022. Hurricane Ian, one of the strongest hurricanes to hit the US, weakened to a tropical storm but continues to dump rain on the state as it makes its way up the US Southeast. , Bloomberg

(Bloomberg) -- Hospitals in the path of Hurricane Ian -- many of which have already been identified as at risk of being inundated by storms -- now face “a 500-year flood event.”

The storm, which dumped as much as a foot of rain in some areas of Florida, was set to regain strength over the Atlantic on Thursday before hitting parts of Georgia and South Carolina. That region was singled out in a study from the Harvard T.H. Chan School of Public Health.

“We find that even relatively weak hurricanes can flood most of the hospitals in urban coastal areas,” researchers wrote in the study released in the journal GeoHealth on Thursday. “Sea level rise expected within this century due to climate change significantly increases flooding risk.”

Florida, where Hurricane Ian made landfall, has populous metropolitan areas with some of the highest percentages of facilities at risk, the study notes.

The researchers investigated hospitals’ flooding risks from hurricane strengths ranging from category 1 to 4 storms. They identified 682 acute care hospitals in 78 metropolitan areas located within 10 miles of the coasts. Many of those hospitals were at risk of flooding even from a Category 1 or 2 storm. Ian made landfall as a category 4 storm.

The densely populated area covered in the study is home to about 85 million people, or about a quarter of the US population. Each metropolitan area’s level of vulnerability was determined by its likelihood of getting hit by a hurricane and how far inland a storm surge could go there.

An estimated 147 hospitals, or 22% of those included in the study, face flooding risks from a category 1 storm. That rises to 46% for a category 4 hurricane.

Flooding inside hospitals isn’t the only threat. The study found that in 18 metro areas, at least half of roads within a mile of the hospitals were at risk of flooding from a category 2 storm.

Even with preparations in place to combat hurricanes’ devastating effects, hospitals are often incapacitated by electricity interruptions and insufficient capacity. Hurricane Sandy, for example, cut off electricity to 40% of hospitals in its disaster area, and back-up generators failed at more than a third of those hospitals, the study notes.

Besides damage to buildings, a number of hospitals in southwest Florida lost power and water as part of region-wide outages, Florida Hospital Association CEO Mary Mayhew said in an interview.

Without water for functions like cooling and dialysis, “a hospital cannot safely provide care to their patients” Mayhew said. She estimated that more than 1,000 patients so far may need to be evacuated, although exact numbers aren’t known and constantly changing. Nursing homes and assisted living facilities may face the same issues, she said.

Florida stationed resources such as ambulances and search and rescue teams in the days before the pandemic that could quickly be deployed, Mayhew said. The state may also move more medical workers into hard-hit areas and set up field hospitals, she said.

Because of the pandemic, “our hospitals have been sustaining an emergency response for the last 2 1/2 years,” she said. “They have really not only tested, but have had to put into action their emergency preparedness plans.”

The US Administration for Strategic Preparedness and Response said it has already deployed more than 70 medical responders to help support the state. The nonprofit American Red Cross said in a tweet that it sent several hundred type O blood products to Florida to ensure availability for patients in the aftermath of the storm.

Drugstore chains are shifting some services to help customers who may be impacted by store closures or infrastructure damage. Walgreens Boots Alliance Inc. said employees are reaching out to patients whose pharmacies may have been hit by the storm. The chain also anticipates waiving some delivery fees to give patients another option for obtaining medications.

CVS Health Inc. said Tuesday that stores in affected areas were receiving additional supplies of emergency items such as water, batteries and first aid products. The company will provide one-time emergency refills of 10-day medication supplies for some plan members, according to the statement.