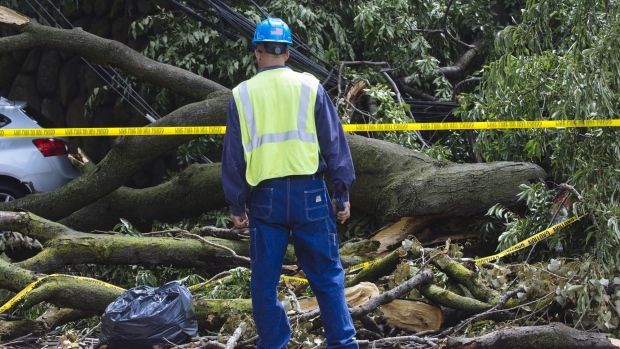 A Consolidated Edison worker stands in front of a fallen tree and power lines in Queens, New York, on Aug. 7. , Bloomberg

(Bloomberg) -- Hurricane Isaias, which left millions without power in the Northeast, is expected to cost insurance companies about $4 billion in the U.S., according to risk modeling firm Karen Clark & Co.

The storm also caused about $200 million of insured losses in the Caribbean, the company said in a report Monday. Those figures include wind and storm surge damage covered by the insurance industry, but doesn’t include National Flood Insurance Program losses.

Isaias brought the highest wind speeds since Superstorm Sandy in 2012 and resulted in low levels of wind damage in more than a dozen states, according to Karen Clark. Insurers, which are dealing with losses from the coronavirus pandemic, also are preparing for what’s expected to be the worst hurricane season since 2005, when Katrina hit the U.S.