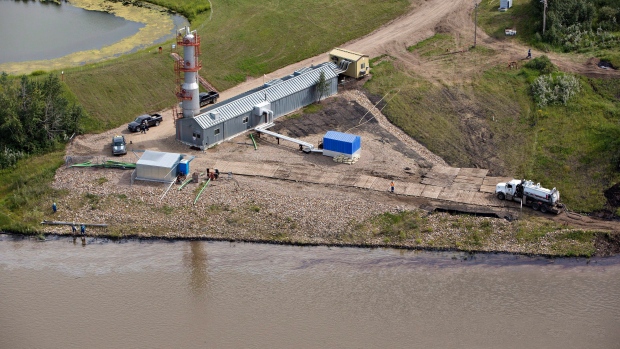 Husky crews work to clean up an oil spill on the North Saskatchewan river near Maidstone, Sask on Friday July 22, 2016. , THE CANADIAN PRESS/Jason Franson

LLOYDMINSTER, Sask. - Calgary-based Husky Oil Operations Ltd., (HSE.TO) has been fined $100,000 for an accident that injured a worker at its complex in Lloydminster, Sask.

The Saskatchewan Ministry of Labour Relations and Workplace Safety says the company pleaded guilty Sept. 18 in Lloydminster provincial court to contravening a subsection of occupational health and safety regulations.

That subsection deals with the failure to implement a safety plan to protect workers from traffic hazards.

A charge was laid after the worker was hit by a truck at Husky's sand disposal facility in August 2015.

One additional charge against the energy company was withdrawn in court.