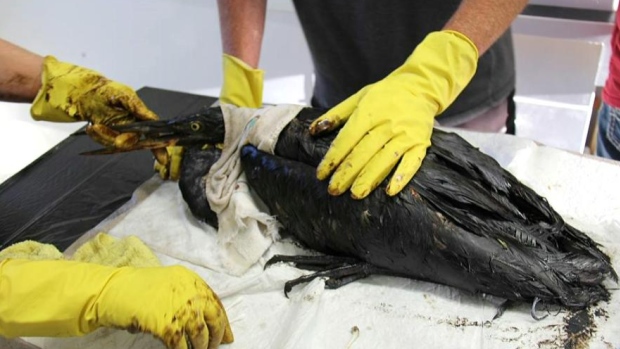 A bird soaked in oil presumed to have spilled from a Husky pipeline last week.

Authorities have recovered at least 40 per cent of the 1,572 barrels of oil that leaked into a major western Canadian river, but the spill is still moving downstream and threatening the drinking water of riverside communities, officials said on Sunday.

In a telephone conference with reporters, officials from the province of Saskatchewan said they had built five booms to contain the spill and were working with Husky and the federal government on a cleanup plan.

The oil plume had passed the village of Maymont, more than 100 km (62 miles) downstream from where the spill started, said Wes Kotyk, executive director of environment protection with the province.

Husky said the cleanup at the site of the leak had been completed, although neither it nor the province gave a time line for resolving the issue entirely.

The company also said three birds had been "impacted" by the spill and that one died.

It was not immediately clear what caused the spill, which the province said first appeared 300 meters (yards) from the river, a figure revised from an earlier one of 600 meters.

Husky spokesman Mel Duvall said in an email: "We'll deal with the cause in due course."

Sam Ferris, a provincial water agency official, said the city of North Battleford, upstream from Maymont, had shut its supply intake and switched to using groundwater. But that supply was limited and the city was exploring alternative sources, he said. 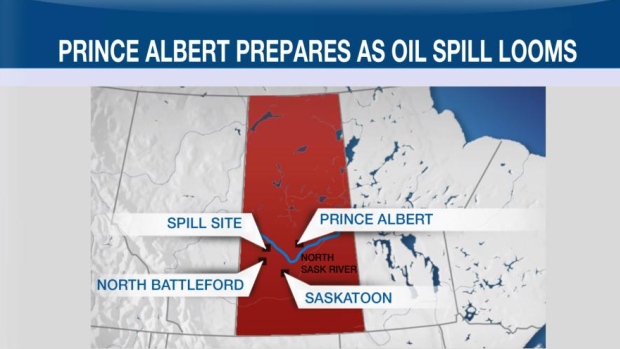 Meanwhile, the sighting of an oily sheen on the North Saskatchewan River from last week's Husky Energy pipeline leak has prompted the City of Prince Albert to shut down the intake at its water treatment plant.

City manager Jim Toye says the slick was spotted near the Saskatchewan community of more than 35,000 shortly after 6:00 a.m. on Monday.

Toye says reservoirs have a two-day supply of water and the city may get permission to tap its storm retention pond for treatment and distribution, which would add another four to five days worth of water.

Work is already underway to lay out a temporary pipeline stretching upwards of 30 kilometres to draw water from the South Saskatchewan River, should the water emergency continue for a much longer period.

Prince Albert city council is holding a special meeting to discuss what Toye calls "drastic" water conservation measures that call for a fine of $1,000 if anyone is caught breaking the rules.

The province has said it is too early to talk about cleanup costs.