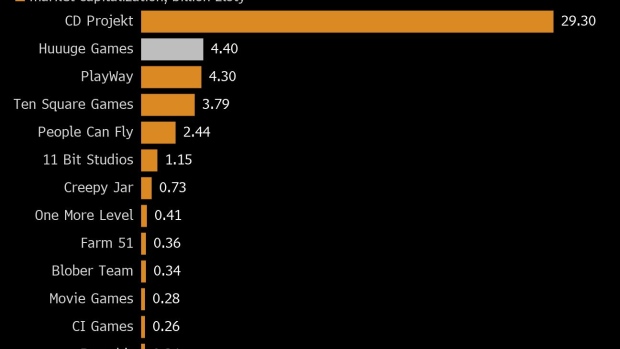 Huuuge and its shareholders sold 33.32 million shares at 50 zloty apiece, the top end of an initial range, according to a statement Friday. Strong investor demand last week prompted existing holders to offload more shares in the offering, boosting the deal size.

The IPO comes in the wake of woes for CD Projekt, whose Cyberpunk 2077 video-game has been plagued by bugs. The stock had slumped as much as 42% following the game’s Dec. 10 release date, and has pared some of those declines over the past two weeks after Elon Musk praised the game.

The IPO values the company at 4.2 billion zloty, meaning Huuuge will be the second-biggest studio listed in Warsaw after CD Projekt SA.

“The success of Huuuge’s offering shows that CD Projekt’s problems with Cyberpunk did not damage sentiment toward Polish gaming stocks,” Pawel Sugalski, a fund manager at Rockbridge TFI SA, said by email. The listing provides a chance to diversify the funds’ portfolio with another free-to-play game maker, he said.

Huuuge, which is due to make its trading debut Feb. 19, follows a string of smaller gaming IPOs in Warsaw. Most recently, People Can Fly owner PCF Group SA floated in December, with more than 50 gaming studios now listed on the main and alternative markets of the Warsaw Stock Exchange. Though Huuuge is registered in the U.S., most of its staff is located in Poland.