Traders piled into the shares and options of Hycroft Mining Holding Corp. and AMC Entertainment Holdings Inc. last week, well ahead of Tuesday’s surprise announcement that the movie theater operator was buying a stake in the gold miner.

Hycroft’s stock is up 361 per cent in a little more than a week, from 33 cents on March 7 to US$1.52 on Tuesday. An average of 190 million Hycroft shares have traded each day over the past week. That’s more than 800 times the average daily trading volume since the miner’s deal to go public through a blank-check merger in June 2020.

Meanwhile, call options for the gold miner to trade above US$2.50 -- a level it hadn’t closed above since mid-July -- also saw a spike in interest in the past week.

To be sure, some of the moves in Hycroft stocks and call options could be attributed to a rise in gold, which has advanced 7 per cent since its recent bottom on Jan. 6. 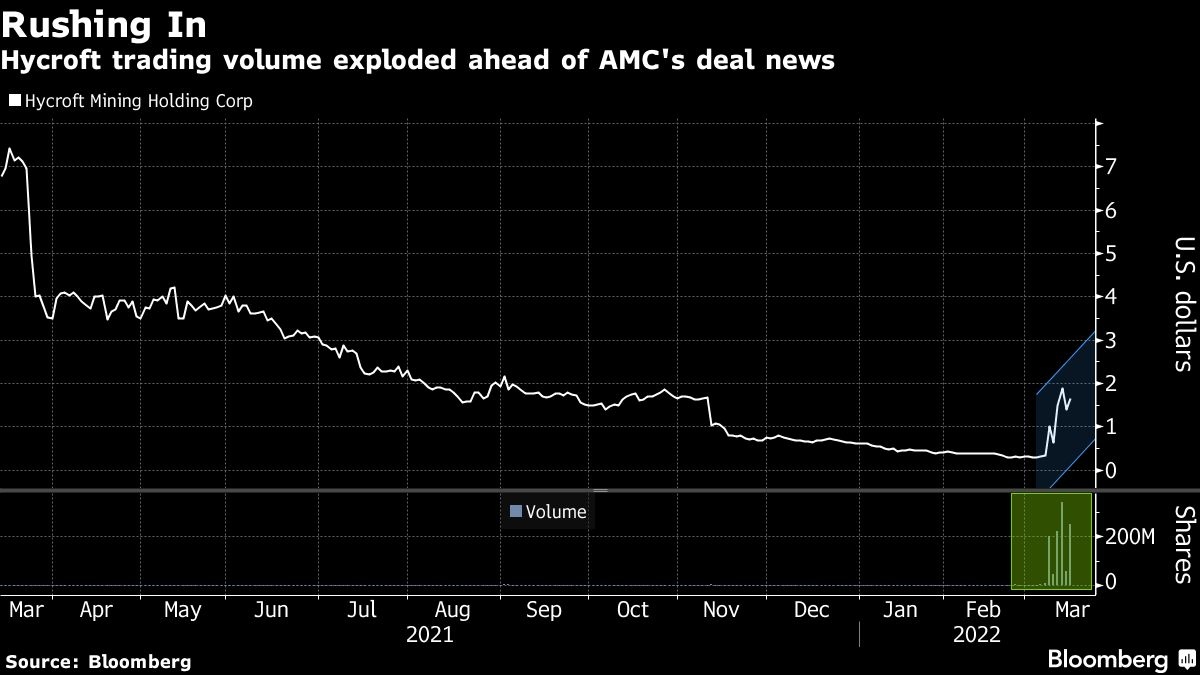 But the flood of demand for Hycroft shares in the days leading up to Tuesday’s announcement that AMC Entertainment would buy 22 per cent of the miner, an unorthodox combination that pairs movies with metals. The news sparked a flurry of trading that sent Hycroft soaring 96 per cent to US$2.72 at the start of Tuesday’s session before the stock pared much of that increase.

Representatives for Hycroft and AMC didn’t return requests for comment. But AMC Chief Executive Officer Adam Aron acknowledged on Twitter that his lawyers are advising him not to speak to the press in light of the action in the stock.

I want to apologize to @jimcramer and @davidfaber, two extraordinary journalists, for canceling my CNBC interview with them today at the last minute. I am excited about our investment in HYMC, but there has been so much volume in that stock today, lawyers insisted I stay off air.

“The price action for Hycroft Mining is rather interesting as shares started to rally a week ago on no news,” said Ed Moya, a senior market analyst at Oanda Corp. “Investors were primarily fixated over the health of the troubled gold miner and while the precious metals were soaring, it seemed like a risky bet to buy short-dated call options.”

While the surge has come after retail investors using forums like Reddit’s WallStreetBets and the popular chatroom Stocktwits were pumped with optimistic commentary on the future of Hycroft, the heightened trading volume likely reaches beyond those armed with Robinhood or Fidelity accounts. Hycroft’s volume from retail traders in the days leading up to Tuesday’s news was heightened but paled in comparison to overall trading, data from Vanda Research show.

Retail trader interest is even stronger on Tuesday. Hycroft’s stock was among the most traded on Fidelity’s platform with more than 4,700 buy orders. However, Moya is skeptical that these gains will stick.