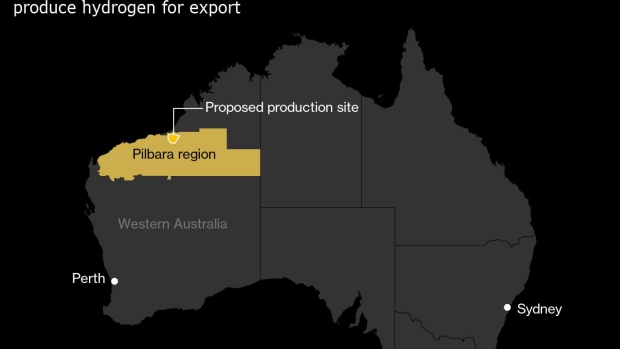 A gauge sits inside a hydrogen-production facility during the opening ceremony of the Toyosu Hydrogen Station, jointly built by Tokyo Gas Co. and Japan H2 Mobility LLC (JHyM), in Tokyo, Japan, on Thursday, Jan. 16, 2020. The latest filling station that will be used to serve Toyota Motor Corp. fuel cell buses during the 2020 Olympics and Paralympic Games opens Thursday near Tokyo's fish market. Photographer: Kiyoshi Ota/Bloomberg , Bloomberg

(Bloomberg) -- An ambitious hydrogen project in western Australia that seeks to become the world’s largest renewable energy export facility got a boost by winning major project status from the government.

The Asian Renewable Energy Hub, which would use electricity from wind and solar plants stretched across thousands of miles of the Pilbara region, is now able to fast-track through approvals processes toward its target of first exports by 2028. The project in the iron-ore rich area would bolster the nation’s ambitions to become a world-leading exporter of the zero-emissions fuel.

“This project has the potential to help lower global emissions while building a new Australian industry that creates jobs and opportunities in regional Australia,” Energy Minister Angus Taylor said in a statement. It is expected to generate about 20,000 direct and indirect jobs over its 10-year construction phase, the government said.

Energy planners are increasingly looking to hydrogen as a cleaner alternative to natural gas in the drive to limit global warming. Australia is seeking to use its vast empty spaces and abundant sun and wind to gain an edge in the nascent industry, which could meet almost a quarter of the world’s energy needs by 2050, according to BloombergNEF.

The project’s first phase would build wind and solar capacity of 15 gigawatts, making it the world’s largest power producing facility behind China’s Three Gorges Dam and equaling Australia’s current total commercial installations of the renewable technologies. That would be used to power electrolyzers that convert the energy into hydrogen at an initial capital cost of around A$22 billion ($16 billion). AREH’s owners target a final investment decision in 2025, while there are longer-term plans to scale up to 26 gigawatts.

The government last year unveiled a national hydrogen strategy with a goal of commercial exports by 2030, and the fuel is one of five priority technologies in its road map to lowering greenhouse gas emissions. Australia has also entered partnerships to explore ways to increase use of the fuel with Germany, South Korea and Japan, the latter of which will begin receiving Australian hydrogen shipments early next year.

“We are effectively creating a new industrial sector,” said Alex Tancock, managing director of Intercontinental Energy, the lead investor in the project. “The falling costs of wind and solar power, our carefully selected locations, and the vast scale of the facility we are building, all mean it’s inevitable that we will be able to produce green fuels that are cost competitive with fossil fuels.”

“It sends a strong signal to everyone involved, including potential customers and investors, that our project is at the forefront of an emerging green hydrogen industry for Australia, and the opening of a massive new export market to the fast-growing Asian economies to our north,” AREH Project Director Brendan Hammond said in a media release.

Finding a way to transport hydrogen economically is one of the biggest challenges faced by champions of the fuel. The hub plans to use the Pilbara’s iron ore ports to ship ammonia, which is easier to move at commercial volume, and then convert it into hydrogen at the destination. The ammonia itself has a number of uses, including as a fertilizer in agriculture.

Securing buyers may also be a challenge, at least in the near term. While hydrogen has been touted as a cleaner fuel for use in heavy transportation and in the steel-making process, it will require $150 billion worth of subsidies by 2030 to achieve commercial scale and drive the cost of production down toward levels competitive with more traditional fuel sources, according to BloombergNEF.

The award of major project status means the hub will have a single entry point for federal government approvals, with its pathway coordinated with state and territory regulations. The project is also being supported by the Western Australia state government, which last week approved AREH’s environmental plans.