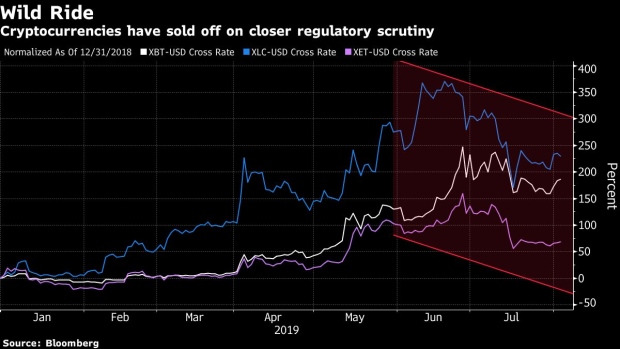 A collection of bitcoin, litecoin and ethereum tokens sit in this arranged photograph in Danbury, U.K., on Tuesday, Oct. 17, 2017. On Wednesday, billionaireWarren Buffettsaid on CNBC that most digital coins won't hold their value. Photographer: Chris Ratcliffe/Bloomberg , Bloomberg

(Bloomberg) -- What was supposed to be a sure-fire way to drive up the cryptocurrency Litecoin’s price is at risk of quickly turning into a liability.

Hype around Litecoin’s so-called halving, which has been trumpeted as a catalyst for reducing future supply, helped more than quadruple its price this year. But as the event itself has neared, investors have turned sour on the fourth-largest digital token, pushing it down 18% last month.

The halving, which Litecoin founder Charlie Lee said will take place on Aug. 4, cuts the number of coins awarded by 50% to the miners who run the computers that process those transactions. The process is supposed to slow issuance to make the token less susceptible to inflation.

Whereas miners now receive 25 new Litecoins per block, they will get 12.5 following the halving. Another halving will happen in four years. And the coin’s previous cut, about four years ago, coincided with a huge run-up in its price, pushing many crypto evangelist to believe the party can continue.

“In the bear market, a lot of traders saw the Litecoin halving as a good fundamental trade and it became pretty crowded,” said Eric Turner, director of research at Messari. “Now that the halving is here, some investors are starting to exit the trade. Halvings tend to be priced in, so the event itself isn’t the positive catalyst that many expect.”

Bitcoin, too, is undergoing a halving in mid-2020 and bulls have already seized on the event as a driver of further gains. After all, they say, the largest digital token swelled to about $1,000 from $10 in the year ahead of its first halving in 2012. The second time around, it nearly tripled in the 12 months leading up to the event.

But the prices of digital tokens undulate by more than just the swings in supply or demand. Cryptocurrencies have come under pressure recently as a growing chorus of lawmakers, central bankers, and even President Donald Trump, have voiced concerns over Facebook Inc.’s controversial plan to launch its own digital asset. Industry analysts warned the social media giant could leverage its more than 2 billion users to create a de facto global currency, worrying policy makers that user privacy could be compromised.

That’s helped push down prices in the cryptosphere. Bitcoin lost 18% in July and peer currencies, including Ether and XRP, dropped 30% and 24%, respectively.

But Litecoin has more fundamental issues, too: developer activity in the token has slowed. The number of contributions to Litecoin, for instance, is at its lowest level since 2014, according to data from GitHub.

“Folks that are invested in Litecoin see these technical moves as not being important enough anymore -- there needs to be more fundamental development,” said David Tawil, president of crypto hedge fund ProChain Capital. “These technical activities, although they make sense from a supply-demand perspective in terms of amount outstanding and so forth, at the end of the day, that story-line only works for so long.”