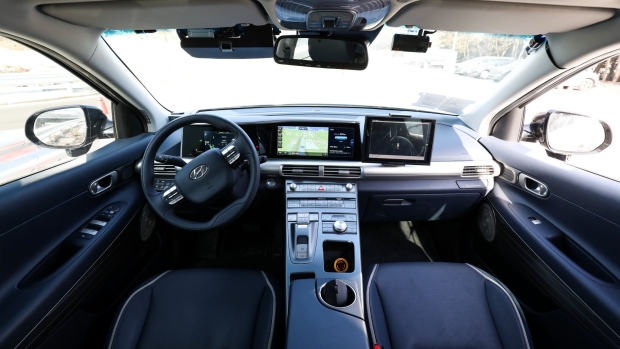 The dashboard and center console are seen inside a Hyundai Motor Co. Nexo autonomous fuel cell electric vehicle in Pyeongchang, Gangwon Province, South Korea, on Tuesday, Feb. 20, 2018. The car can drive more than 600 kilometers (370 miles) on a single five-minute charge, according to the company. , Bloomberg

(Bloomberg) -- Hyundai Motor Co. will spend 20 trillion won ($17 billion) over the next six years on new technology in a bid to transform itself into a producer of electric and autonomous cars.

Announcing its strategic plan to 2025, the South Korean company pledged to spend almost half the new money on electrification. Autonomous driving will soak up 1.6 trillion won of the total, Hyundai said.

The new investment forms part of a surge in spending at the company, which like carmakers worldwide faces an expensive new era of lower-emissions, battery-powered vehicles. Rivals such as Volkswagen AG have also pledged tens of billions of dollars in investments in electrification.

If successful, the plan should create a more profitable business with a global market share of 5% in 2025, up from 4% in 2018, the company said.

To contact the reporter on this story: Angus Whitley in Sydney at awhitley1@bloomberg.net