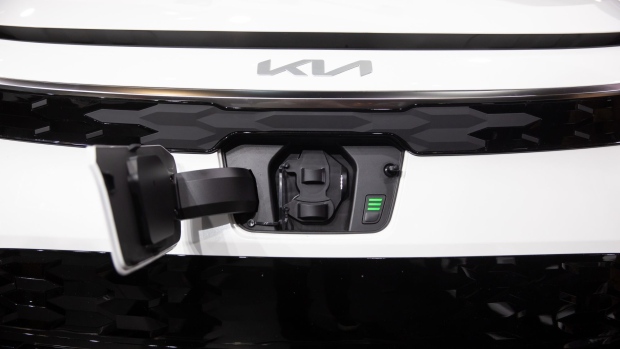 The charging port of a Kia Niro electric sports utility vehicle (SUV) during the 2022 New York International Auto Show (NYIAS) in New York, U.S., on Wednesday, April 13, 2022. The NYIAS returns after being cancelled for two years due to the Covid-19 pandemic. , Bloomberg

(Bloomberg) -- Hyundai Motor Co. and its affiliate Kia plan to invest 21 trillion won ($16.5 billion) to boost the production of electric vehicles in South Korea, including the establishment of new factory that would ultimately have the capacity to make around 150,000 cleaner cars a year.

Under the plan, the two automakers aim to increase annual EV production in the nation to 1.44 million units by 2030 from an expected 350,000 units this year, Hyundai said in a statement Wednesday. That forecast 1.44 million output would account for about 45% of Hyundai and Kia’s planned global EV production volume by then.

The new factory for purpose-built vehicles will be located within Kia’s existing Hwaseong manufacturing site, Kia said in a separate statement. Construction is expected to begin in the first half of 2023, with commercial production starting in the second half of 2025.

Purpose built vehicles are special purpose vehicles typically based on small- to medium-sized vans. Because they use the same chassis, start-of-production and time-to-market for new models is generally shorter.

Hyundai Motor Group, including Kia, Hyundai Motor and Genesis, aims to sell 3.23 million EVs a year globally by 2030, shooting for a 12% share of the global EV market.