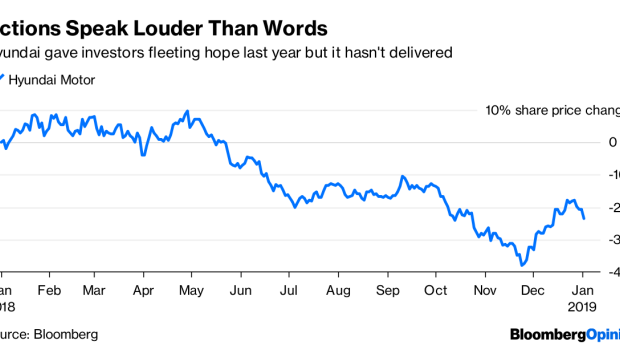 (Bloomberg Opinion) -- Investors like targets – even ambitious ones – as long as they’re grounded in reality.

South Korea’s flailing automakers, Hyundai Motor Co. and Kia Motors Corp., are targeting combined sales of 7.6 million vehicles in 2019, slightly more than their 2018 target, the companies said in regulatory filings. That's bold considering the global auto market is forecast to shrink at least 1 percent this year and that the group looks likely to have missed its goals for last year. Hyundai Motor stock fell as much as 4.2 percent.

The group blamed factors such as protectionism and financial instability for its inability to feel the pulse of its various markets. In fact, Hyundai Motor has only itself to blame for much of its downward spiral, as we wrote in October when profit collapsed almost 70 percent.

In early December, the company unveiled a plan to invest almost $7 billion in fuel-cell cars and overhaul its management. Investors liked that and the stock popped. But once again, the plan didn't address Hyundai Motor’s more immediate and serious issues of dismal earnings and a  severely flawed sales strategy.

Take China, where Hyundai Motor thinks new models will reverse its slide. The company’s sales have been falling faster than the market: In the first three weeks of December, average daily volume dropped by 40 percent from a year earlier, compared with declines of 25 percent in November and 18 percent in October. As China’s auto market, and economy, undergoes a step-change, the recovery won’t be so easy.

The group said it would release more than 44 electrified models over the next six years and start operation of autonomous robotaxis in South Korea by 2021. But here’s the thing: The tide in global auto markets has been shifting, and not overnight. More nimble carmakers have managed to focus on their markets and products while dealing with rising costs. The likes of Hyundai Motor have thrown darts at all things futuristic instead.

To succeed, the company should go back to basics: Pare those billions of dollars of bets on the future and stick to building better cars in the markets it knows well. Attempting to regain lost ground or play catch-up – by pushing deeper into SUVs in China, for instance – is likely to set Hyundai Motor back further.

The group still has to contend with pressure from activist investor Elliott Management Corp. In a New Year’s address, Hyundai Motor Executive Vice Chairman Euisun Chung told employees he would enhance shareholder value and actively communicate. That’s also a bold promise, given the company’s silence for much of last year in the face of Elliott’s calls for improved governance. Investors look to be treating this latest pledge as an empty one.