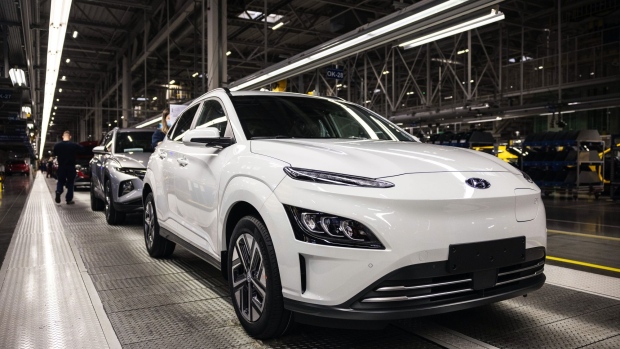 (Bloomberg) -- Hyundai Motor Co. said the timing and details of its planned $7.4 billion investment to support electric-vehicle manufacturing in the U.S. depend on whether Congress passes President Joe Biden’s infrastructure bill.

“We have the plans. We want to see it finalized,” Jose Munoz, the Korean automaker’s chief operating officer, said on a conference call with reporters. Hyundai is waiting to “clarify the incentive situation to make concrete announcements about additional capacity.”

Hyundai Motor Group, which owns both the Hyundai and Kia car brands, announced the investment plans in May. The effort is supposed to run through 2025, supporting vehicle assembly as well as hydrogen refueling stations and unmanned flying taxis. The company has said the EVs will be made at Hyundai’s assembly plant in Montgomery, Alabama.

Biden’s proposed infrastructure bill has stalled in Congress as progressives and moderates remain divided over which pieces of the president’s agenda to pay for, and how long to pay for them. With potential funding for charging stations and other incentives, automakers are betting the legislation could help accelerate a consumer shift to plug-in vehicles, which made up just 1.8% of new-car sales in the U.S. last year.