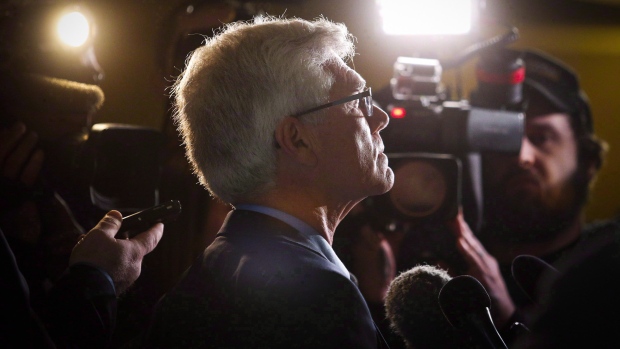 OTTAWA - Canada's natural resources minister on Tuesday apologized for remarks he made about anti-oil pipeline protests that some people interpreted as a threat to use troops against demonstrators.

Jim Carr, speaking after Ottawa approved Kinder Morgan Inc's plans to build a crude pipeline, said last Thursday that in case of violent protests the government would keep people safe "through its defense forces, through its police forces."

Opposition legislators accused Carr, a member of the Liberal government, of using reckless and incendiary language.

Environmental and aboriginal groups vow to do all they can to oppose the Kinder Morgan bid to more than double the capacity of its Trans Mountain pipeline to the Pacific Coast from Alberta's oil sands.

"I didn't choose my words carefully last week and I regret that," Carr told reporters on Tuesday. Carr said Canada had a tradition of tolerating and embracing dissent.

"It was not meant to conjure up images or to bring up bad memories for any community ... I am fully confident that Canadians will be peaceful in the way in which they express themselves on this and other decisions."

Use of the military to deal with indigenous protests is a sensitive topic in Canada. In 1990, after a high-profile land dispute between the Quebec town of Oka and a group of Mohawks turned violent, soldiers were sent in to end the confrontation.

Carr declined to draw comparisons between any future protests against Trans Mountain and a stand-off in the United States, where a coalition of activists has been demonstrating  against a proposed oil pipeline in North Dakota.

Separately, Prime Minister Justin Trudeau told the Assembly of First Nations (AFN )- an umbrella group of Canada's 634 indigenous bands - that he was proud of Carr's apology "for his unfortunate comment."

AFN chief Perry Bellegarde said that given Carr had said sorry, it was time to move on.

"We don't want another 1990. That doesn't get anybody anywhere," he told reporters.

Although Kinder Morgan plans to start construction in September 2017, members of the ruling Liberal Party said the company is likely to face a series of protracted court challenges before it can dig.