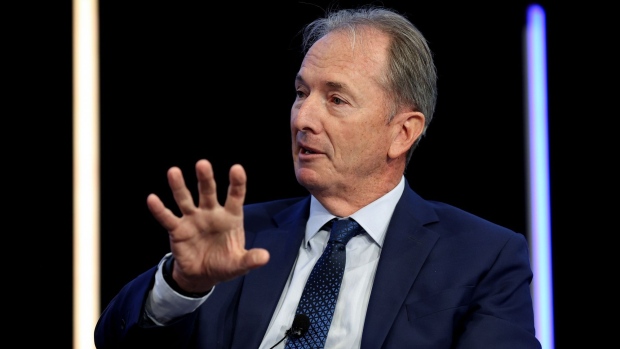 (Bloomberg) -- Elon Musk’s time atop Twitter Inc. has been one of turbulence, with mass firings followed by fired workers being asked back, accounts suspended and accounts restored, experiments with paid membership, and celebrities quitting the social network. One person who isn’t giving up on its billionaire owner: the CEO of Morgan Stanley.

“I wouldn’t bet against Elon Musk,” James Gorman said Thursday at a Reuters conference in New York, calling Twitter “a great company” and Musk “an extraordinary executive,” and talking up a visit he made to a Tesla Inc. auto plant in the Los Angeles area.

Banks led by Morgan Stanley provided $13 billion of debt to Musk to help him buy Twitter and now face a challenge pitching that debt to investors. The biggest buyers of leveraged loans are already weighed down by technology-company debt, and Musk’s unusual approach to running Twitter has made it difficult for investors to value the company going forward.

Banks that jumped at the chance to help an important client now face losses running into several hundred million dollars on the unsold debt sitting on their balance sheets.

“Institutions like ours are not stupid. We don’t get behind that kind of business and that kind of opportunity unless it’s real -- and it’s very real,” Gorman said. He said Musk ranks with Steve Jobs and Bill Gates among the most interesting entrepreneurs of the past 50 years. “Who would not want to do business with a person who has that kind of capability? Shame on an institution who’d walk away from that.”