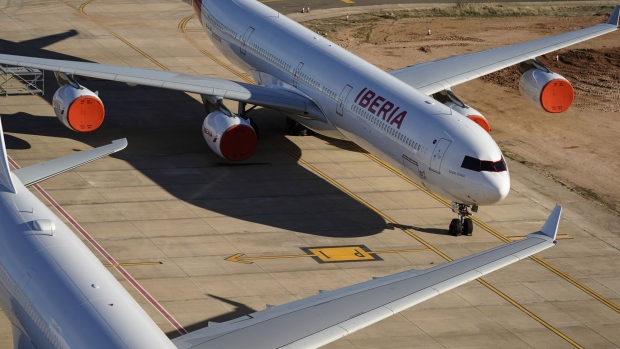 Engine intake and window covers on an Iberia passenger aircraft at Ciudad Real International Airport, in Ciudad Real, Spain, on Tuesday, Oct. 27, 2020. Ciudad Real airport reinvented the hub as a home for grounded planes, with capacity to store as many as 300 through a series of renovation projects. , Bloomberg

London-based IAG has committed to changing the share structure of Iberia, Iberia Express and Vueling by the end of 2020, “making clearer” their control by EU-based investors, Transport Secretary Pedro Saura said in an interview. The government and air-safety agency back the plan, he said.

Carriers operating within the EU must be majority owned by interests from the bloc to meet licensing conditions, something that will impact IAG unless there’s a U.K.-EU deal on the mutual recognition of share capital. The company, though legally registered in Spain, might struggle to meet the requirement since it has large numbers of U.K. and U.S. investors and is 25% owned by Qatar Airways.

European investors must control both political and ownership rights in the Spanish units, Saura said. At present, Spanish department-store operator El Corte Ingles has political rights in Iberia, while IAG has economic control.

IAG said plans regarding ownership and control were submitted last year to Spain and Ireland -- where its Aer Lingus arm is based -- and have been confirmed by regulators from the countries as satisfying EU rules in the event of Brexit being finalized without a deal being reached. The EU in turn has been notified about the remedial plans by those regulators, it said.

IAG said on Sept. 10 in a rights issue prospectus that potential measures include ensuring that a majority of independent directors are EU nationals, and introducing caps on share ownership for people or institutions from outside member states where required.

It said the proposals will be implemented by the year’s end “if necessary,” and that the European Commission has the right to review them and ask licensing authorities to implement corrective measures where appropriate.

Saura said Spain will separately seek guarantees from IAG on the future of Madrid-based Air Europa Lineas Aereas SA before signing off on a planned purchase of the long-haul leisure carrier.

While IAG negotiated the takeover a year ago, Spain recently agreed to provide Air Europa with 475 million euros ($561 million) in emergency funding as part of a plan to protect strategic companies hit by the coronavirus crisis.

“Deals involving Air Europa must take the Madrid hub into account,” Saura said. “We’re talking about public money. There must be guarantees for taxpayers. So they must pay the money back and preserve the hub.”

Spain has also reserved the right to appoint two Air Europa board members and participate in the selection of a chief executive officer.

IAG for its part is seeking to reduce the 1 billion-euro price tag for Air Europa to take account the global slump in demand.

Any conditions attached to the Air Europa aid package would factor into its considerations on the purchase, IAG Chief Executive Officer Luis Gallego said in an Oct. 30 conference call.