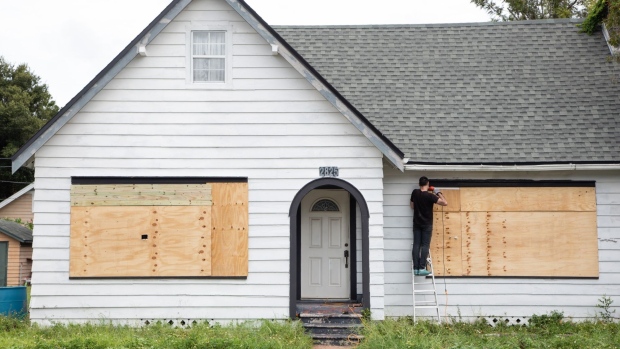 Resident boards up a house ahead of Hurricane Ian in Florida on Sept. 27. Photographer: Tristan Wheelock/Bloomberg , Bloomberg

(Bloomberg) -- As Hurricane Ian barrels toward Florida’s Gulf coast, officials are urging those in the storm’s path to brace for deadly wind, flooding and storm surges from what may become one of the costliest storms to hit the US.

“It’s no longer possible to safely evacuate,” Florida Governor Ron DeSantis said Wednesday in a briefing. “It’s time to hunker down and prepare for the storm.”

Hurricane Ian is holding its strength -- with winds of 155 miles an hour -- as it gets closer to land, causing “catastrophic” storm surge, winds and flooding in the Florida peninsula, according to the US National Hurricane Center. The storm is about 25 miles (40 kilometers) from Fort Myers, Florida, where it is expected to make landfall in the next few hours.

“Weakening is expected after landfall, but Ian could be near hurricane strength when it moves over the Florida east coast tomorrow, and when it approaches the northeastern Florida, Georgia and South Carolina coasts late Friday,” the center said.

Ian’s winds are just 2 mph away from reaching Category 5 strength, the most powerful rating for a storm on the Saffir-Simpson scale, according to the US National Hurricane Center. Only four Category 5 hurricanes have hit mainland US in records going back to 1851. Ian’s top winds are now raking the shoreline with devastating effect.

Ian is estimated to inflict $67 billion in damage, according to Chuck Watson, a disaster modeler with Enki Research. That would easily rank the hurricane among the top 10 most expensive storms in US history. The hurricane is bearing down as climate change fuels extreme weather worldwide. The year has brought deadly flooding in Kentucky, a European heat wave that killed more than 2,000 people in Portugal and Spain and a major hurricane that left destruction from Puerto Rico to Atlantic Canada. A relentless drought also continues to grip the Western US.

Ian could bring a wall of water as high as 18 feet into Charlotte Harbor and along the shoreline. Major flooding is occurring in Naples, Florida, according to the National Weather Service. The City of Tampa is also reporting flooding in downtown areas. Rivers across the state are expected to rise to record levels in the coming days.

Jamie Rhome, the center’s acting director, said in a briefing that he has rarely seen storm surge forecasts as dire for southwestern Florida in his career. Anyone who hasn’t evacuated along the coastal areas where Ian is coming ashore should remain in place, Rhome said.

“Do not venture outside at all, do not try to evacuate at this point,” he said in his video briefing. “You really have to get into the interior of your house and ride this part out.”

The streets of Tampa -- which yesterday looked to be in the direct line of Ian -- are largely deserted, after authorities yesterday encouraged more than 2 million people in the region to evacuate. Ian’s winds are so strong they’re pushing water out of Tampa Bay, exposing the ocean floor in the harbor.

More than 644,000 utility customers along Florida’s southwestern coast were without power as of 2:27 p.m. local time, according to PowerOutage.us.

Carriers have canceled nearly 2,000 US flights Wednesday and about 1,600 for Thursday, according to data tracker FlightAware.com. Orlando, Miami and Tampa top the list of airports with the most canceled flights on Wednesday.

Ian will rip through Florida’s citrus groves, potentially knocking ripe fruit off trees and ruining the crop, Maxar Technologies Inc. meteorologist Donald Keeney said. More than 90% of Florida’s citrus belt is at risk, he said. The path will likely take it back into the Atlantic on Florida’s eastern side before it makes a second landfall as a much weaker storm on the coast of Georgia or South Carolina, which will damage cotton quality there.

Massive flooding across the state could surpass damages from wind and storm surge, threatening to deal a major blow to Florida’s flagging insurance industry. The largest insurers reduced their presence in the state to dodge losses brought on by hurricanes, and the smaller underwriters still active there have been forced to hike premiums and narrow coverage to keep pace with litigation and fraud. So far this year, six insurers that write policies in the state have been declared insolvent, and a major storm could stretch the finances of those still standing.

If Ian maintains its strength as it comes ashore, it will be the first Category 4 storm to hit the US since Hurricane Ida last year. Like Ida, Ian’s true danger may lie in heavy rain, which may exceed two feet across Florida and the US Southeast. Storm surge warnings have also been issued for parts of South Carolina.