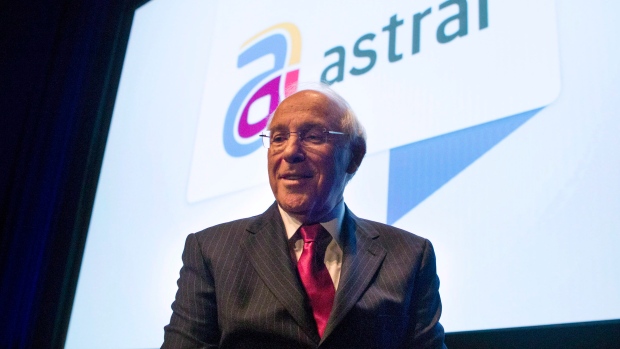 TORONTO - Ian Greenberg, the media mogul who alongside his brothers helped turn Astral Media into a Canadian radio and television powerhouse, has died at 79.

Media giant BCE Inc., where Greenberg was a board member, says he died Monday. No cause was given.

“Canada has lost a business visionary and media legend, and we at Bell have lost a wise and affable colleague and friend,'' BCE chair Gordon Nixon said in a statement.

Greenberg was born in Montreal to an Ashkenazi Jewish family of 10, including his brothers Harold, Harvey and Sidney.

Money was often short in the household and when his mother Ann died suddenly in 1961, the brothers were shouldered with the responsibilities of working together to provide for the family.

Two of Greenberg's older brothers had spent their teenage years working in a camera store, which inspired them to take a $15,000 loan from a close relative and invest it into a film processing business called Angreen Photo Inc., named after their mother.

“They really became a unit and took care of each other,'' said Phyllis Yaffe, a longtime colleague who sat on various boards with Greenberg.

“They were street smart, they were guys who could outwit others.''

Opening locations inside Miracle Mart department stores, the brothers grew the business over the next decade. Small acquisitions expanded their investments into motion picture processing and they secured the exclusive rights for photo products at Expo 67.

They went even bigger in 1971, listing their company Astral Communications Ltd. on the public market.

Those ventures delivered mixed results at best, with 1982 high school sex comedy “Porky's'' one of the few films that turned a profit. It held the claim as the highest-grossing Canadian film at the North American box office for years before 2002's “My Big Fat Greek Wedding'' took the crown.

The Greenbergs, willing to recognize when an investment wasn't working, swiftly exited the moviemaking business in the 1980s, putting their focus on growing the retail stores of Astral Photo and tapping into the burgeoning world of premium cable television.

As the decade wore on, they collected a slate of valuable pay-TV assets, including English- and French-language movie channels, First Choice (later renamed The Movie Network) Premiere Choix (eventually called Super Ecran) and the Family Channel, confident that home audiences would be willing to pay a premium for the latest Hollywood movies.

When his older brother Harold fell ill in 1995, Ian stepped in as Astral's CEO. He quickly shifted the company's priorities away from photography and video assets and towards buying radio stations, an area he saw as having a promising future.

Astral Media continued to grow as the country's largest private radio broadcaster, a status bolstered by the acquisition of Standard Broadcasting from the Slaight family in 2007.

In television, Greenberg used his negotiation tactics to secure deals others couldn't.

One of his big wins was convincing executives at HBO to grow their relationship beyond licensing programming and give Astral the right to launch HBO Canada, a brand that had been sought after by others for years.

“The way that he charmed the HBO guys to let him use that brand in Canada was genius, it was absolute genius,'' said Yaffe.

“He went to their weddings, they went to his parties. He really knew how to build relationships.''

His knack for dealmaking helped Astral lock in the rights for advertising on the city of Toronto's bus shelters and billboards around the same time.

By the time Astral was acquired by BCE in 2013 for $3.38 billion, Greenberg had steered the company to at least 66 consecutive quarters of profitable growth, an astounding feat in the volatile media industry.

“Ian ran his business with a very simple approach: we have to sell more this year than we did last year, and we have to spend less,'' Yaffe said.

“And that's how he grew the business quarter after quarter.''

After the BCE purchase, Greenberg assumed a role as director of the company's board.

He also held a position as chair of Cineplex Inc. where he recently oversaw talks for the Canadian exhibitor's $2.8-billion takeover by movie chain Cineworld, which fell apart in the COVID-19 pandemic.

“He was a real calming influence,'' said Ellis Jacob, head of Cineplex.

“And in that way, he was also a great mentor and supporter of our company and me personally. His steady hand and his focus was really something that I valued.''