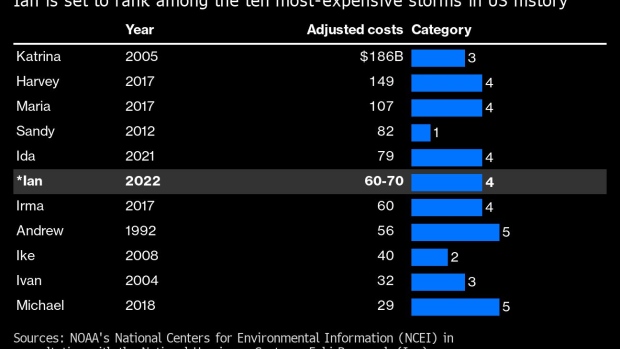 (Bloomberg) -- Five days after Hurricane Ian slammed into Florida, bringing with it a deadly storm surge, catastrophic flooding and powerful winds, the destruction it caused is becoming clearer.

Florida’s death toll from Ian has climbed to at least 68, according to officials, while the Associated Press put the number at 71, adding to fatalities in Cuba and North Carolina. Insured losses have risen to as much as $57 billion, according to modeler Verisk. President Joe Biden is scheduled to come to Florida on Wednesday to survey the damage from what he described as one of the worst storms to ever hit the US. Biden is currently in Puerto Rico, where the US government has pledged more than $60 million in funding to help the island rebuild after Hurricane Fiona.

The National Hurricane Service discontinued its updates on Ian over the weekend after it weakened to a post-tropical cyclone. By Saturday, the system had “fully dissipated,” according to the agency.

At least 78 people have been confirmed dead from the storm, including 71 in Florida, four in North Carolina and three in Cuba, the Associated Press said. Search and rescue efforts continue in the state, where more than 1,600 people have been rescued statewide.

About 520,000 homes and businesses in Florida were still without electricity Monday evening, the AP said. Ian knocked out power to millions of customers across Florida and crews have been working to restore electricity infrastructure. State officials said they expect power to be restored by Sunday to customers whose power lines and other electric infrastructure is still intact, according to the AP.

Fertilizer firm Mosaic Co. said storm damage to its Florida facilities will result in lower phosphate output for the rest of the year.

Significant flooding and high winds from Ian caused “modest” damage to its facilities and infrastructure, Mosaic said Monday in a statement. Early assessments indicate phosphate production will be down by about 200,000 to 250,000 metric tons, split over its third and fourth quarters. Repairs are expected to be completed in the next one to two weeks.

Timing of shipments was also affected by the storm. Phosphates sales volumes in the third quarter are now expected to total 1.6 million to 1.65 million tons as port and rail closures delayed late third-quarter shipments to October, the company said.

Mosaic resumed loading fertilizer in Tampa, Florida, days after Ian interrupted operations, according to a person familiar with the matter. The ship Basic Challenger has returned to Mosaic’s terminal in Gibsonton, Florida, on the east side of Tampa Bay and is loading fertilizer.

Most of Florida’s retail stores have resumed operations following Ian’s aftermath. As of Monday, Target had only one store in the state closed while a Walmart Inc. Supercenter in the Fort Myers area was the retail giant’s only Florida location still shut. Winn-Dixie is down to less than 10 closures including in Bradenton and Port Charlotte, according to its website, although some outlets are closing early at 6 p.m.

Publix, which only had 11 stores shut down as of last Friday, didn’t immediately provide an update.

Florida cities looking to rebuild from the devastation of Hurricane Ian will be financing their efforts during the worst environment for municipal borrowing in more than a decade.

Washed-out roads and bridges are only the most glaring examples of urgent infrastructure repairs that the state and its localities are grappling with after the storm. Debt to fund the recovery will probably start hitting the municipal market as soon as this quarter, according to Barclays Plc.

Federal and state aid will likely ease much of the financial blow, but officials looking to issue debt to rebuild and also bolster infrastructure against the risk of increasingly severe weather will be doing so during a brutal juncture for the bond market: Ten-year benchmark municipal yields are near the highest since 2011, and the Federal Reserve is signaling further interest-rate hikes to combat rampant inflation.

Florida-based berry supplier Wish Farms suffered from some submerged fields and a loss of power due to Ian. The storm also ripped up as much as 15% of the plastic ground cover used to prepare fields for strawberry planting, according to spokesman Nick Wishnatzki.

“We consider ourselves very lucky to only experience that minimal damage,” he said Monday in a phone interview.

Meanwhile, International Fresh Produce Association Chief Executive Officer Cathy Burns said she expects some short-term impacts on price and availability of some fresh produce grown in the state. Florida ranks No. 1 for production of whole cucumbers and tomatoes, according to the association.

Florida’s fuel supplies are improving after Hurricane Ian disrupted deliveries. Places are now getting consistent deliveries and while there are still some long lines, all communities have supplies, according to Ned Bowman, executive director of the Florida Petroleum Marketers Association. He said it may take another 5 to 7 days to fully return to normal. Challenges remain for Sanibel Island and Pine Island, since bridge access has been disrupted, he said.

The insurer is facing more than 225,000 claims and $1.9 billion to $3.7 billion in losses, Citizens spokesman Michael Peltier said Monday in an email. State law requires the company to levy assessments when it experiences deficits in the wake of a major storm or disaster.

Florida Power & Light, the state’s largest utility, said it plans to have power restored to almost all of its customers by late Friday if all goes well, Chief Executive Officer Eric Silagy said in a Monday briefing with reporters.

“It’s been 76 hours since Ian, which was a monster storm, left Florida,” Silagy said. Since then the utility has restored power to 1.8 million customers, which is 83% of all those affected, he said. “We’re going to be able to get this done faster than I thought.”

Initial damage estimates to Florida groves from Hurricane Ian are pointing to a significant crop loss from high winds, pushing orange juice futures to the highest in almost six years in New York. The contracts soared 4.8% to edge past $2 a pound, the highest since mid-December 2016.

Mixon Fruit Farms, a family operated coastal citrus producer based just south of Tampa, is still without power days after the hurricane.

“It looks like about 30% of the fruit was knocked off the tree,” Janet Mixon said, referring to orchards located in the hard-hit Manatee County. “The oranges are now laying under the tree.”

Climate change made Hurricane Ian’s most extreme rainfall about 10% worse than it would have been without two centuries of greenhouse gas pollution, according to a first-take analysis of the storm by two US climate researchers. The rapid analysis by Michael Wehner of the Lawrence Berkeley National Laboratory and Kevin Reed of Stony Brook University was shared on Twitter.

Just over 613,000 customers in Florida still have no electricity as of early Monday morning, according to PowerOutage.us. Crews have already restored power to some 1.8 million customers across the state, figures from the Florida Division of Emergency Management show. In Puerto Rico, more than 120,000 are without power.

Verisk estimated that insured losses to onshore property from Ian will range from $42 billion to $57 billion. That includes wind, storm surge and inland flood losses resulting from both of Ian’s landfalls in Florida and South Carolina.

Wind damage accounts for the majority of the loss estimate, totaling anywhere from $38 billion to $51 billion. Ian’s storm surge likely racked up $3 billion to $5.5 billion in insured losses and inland flooding less than $1 billion.

Cell-service has been restored across most of Florida, though the hardest-hit counties are still experiencing significant zones without signal, according to a report from the Federal Communications Commission Sunday.

Governor Ron DeSantis announced Saturday that Elon Musk’s SpaceX will deploy 120 units of its Starlink satellites to southwest Florida to provide Internet service for those affected.