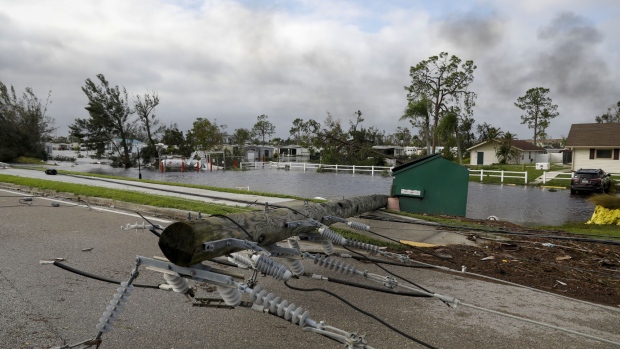 A broken utility pole on a flooded street following Hurricane Ian in Fort Myers, Florida, US, on Thursday, Sept. 29, 2022. Hurricane Ian, one of the strongest hurricanes to hit the US, weakened to a tropical storm but continues to dump rain on the state as it makes its way up the US Southeast. , Bloomberg

(Bloomberg) -- Parts of Florida’s electric grid must be completely rebuilt after Hurricane Ian battered the state and blacked out 2.6 million homes and businesses -- many of which face days or even weeks without power.

Ian walloped Florida’s electric system despite years of efforts by the state’s utilities to harden it. After a string of major hurricanes ravaged the state in 2004 and 2005, Florida utilities invested billions of dollars upgrading the system, replacing many wooden utility poles with concrete ones and placing some power lines underground. The state’s four biggest utilities spent an estimated $3 billion on storm protection in 2020 and 2021, according to the Florida Public Service Commission.

“I don’t care how much you spend, if a Category 5 hits, it’s going to tear up something,” said J.R. Kelly, a former utility customer advocate for Florida’s Office of Public Counsel. “There is no fool-proof system.”

Some sections of Florida’s grid were more vulnerable than others.

The company that provides power to the region where Ian made landfall with 150-mile-per-hour winds, Lee County Electric Cooperative, acknowledged in a report to state regulators earlier this year that 19% of the distribution poles it examined -- or 5,904 -- failed inspections in 2021. The cooperative later replaced 750 of those poles.

More than 90% of Lee County Electric customer were without power Thursday afternoon. The storm all but destroyed the grid in the surrounding area, effectively knocking Lee and Charlotte counties “off the grid,” said Florida Governor Ron DeSantis.

The state’s largest utility, NextEra Energy Inc.’s Florida Power & Light, said some sections of grid in southwest Florida are so damaged that they will need to be rebuilt. That will mean prolonged outages for some. The work needed is “more than just connecting power lines back to poles,” DeSantis said Thursday at a press conference. Other counties likely won’t require a structural rebuild.

The blackouts Ian left in its wake would have been worse without the state’s investments in its grid, said Michael Webber, an energy professor at the University of Texas at Austin. He compared the fallout from Ian to the millions more in the Lone Star State who lost power during a brutal cold snap in 2021.

“The same storm hitting other states would knock the power out to many more millions of people,” Webber said in an interview.

As many as 1.7 million Florida Power & Light customers have lacked power amid Ian’s wrath, below the more than 4 million during Hurricane Irma in 2017, said Jeffrey Cassella, an analyst at Moody’s Investors Service. “It would be unfair to expect that you can prevent the outages that we are having, because these storms are so severe.”

Both Florida Power & Light and Duke Energy Corp. reported Thursday that they had restored power to some customers affected by Ian. But both cautioned that the flooding, winds and rain still trailing the storm were hampering efforts to assess the damage.

“There are some destroyed areas that simply cannot be repaired and they will have to be rebuilt,” said Eric Silagy, chief executive officer of Florida Power & Light, during a media briefing Thursday.

(Adds details of poles failing inspection in the fourth paragraph.)