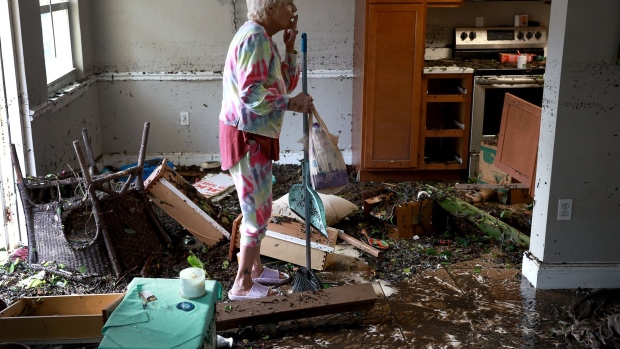 (Bloomberg) -- As Hurricane Ian pushes up the US East Coast, the first glimpses of the storm’s catastrophic strike on southwestern Florida are starting to come into view. A row of beachfront houses destroyed. An apartment floor covered in water and dirt. A utility pole snapped in half. A washed-out highway. Boats littering the sidewalk.

Officials warn that it will take days, if not longer, to assess the full magnitude of damage left behind. That's especially true in places inland with heavy rainfall, where water is less likely to quickly recede, making them difficult to reach. Even a preliminary scan of impacts along the coast, which experienced the brunt of Ian’s storm surge and Category 4 winds, reveals the storm to be a climate disaster.

Perhaps the biggest unknown at this point is Ian’s impact on loss of life. Despite repeated, early warnings to evacuate, there are many signs that people stayed behind. Speaking at a Federal Emergency Management Agency briefing on Thursday, President Joe Biden said: “We’re hearing early reports of what may be substantial loss of life.”

Also unknown is how the storm impacted the state’s orange crop. Early estimates say Ian’s cost could range from $69 billion to $100 billion.

What is known so far: In Fort Myers — not too far from where Ian made landfall with winds of 150 miles (241 kilometers) per hour — homes on the beach and on blocks inland were flattened, while many others were partially destroyed.

The rest of the Fort Myers beach looks much the same. "I got an aerial tour of Fort Myers beach,” said Jared Moskowitz, a Florida Democrat running for Congress, on Twitter. “Most of it will need to be completely rebuilt.” Moskowitz was previously the director of Florida’s Division of Emergency Management.

Indeed, many apartment complexes and other buildings flooded as a result of rain and storm surge. Thanks to rising seas and warming temperatures, climate experts have warned that hurricanes like Ian are getting more intense and wet.

In some cases, boats carried by the surging waters smashed into buildings and blocked walkways and streets.

Utility polls are also down in parts of Florida. As of Thursday afternoon, about 2.6 million Floridians were without power, according to  PowerOutage.us. Florida Power & Light Co., the state’s largest utility, says some 21,000 people are in the field working to restore power. “No grid is hurricane-proof,” Bryan Garner, a utility spokesman, said at a news briefing. “Hurricane Ian impacted almost the entire peninsula of Florida.”

In Punta Gorda, Florida, not far from Ian’s point of landfall, trees were flattened and buildings collapsed. At its peak, the storm’s winds were just shy of Category 5 strength, the highest level on the Saffir-Simpson hurricane scale.

Florida Governor Ron DeSantis painted a grim picture of nearby tourist destination Sanibel Island. “Sanibel is destruction,” he said during a press conference. “It got hit with really biblical storm surge.”

Part of the Sanibel Causeway was washed away, complicating recovery efforts. The causeway is the only way in and out of the island by car, and DeSantis said rescue operations have started via air and boat.

South of Sanibel in Bonita Springs, people have started to survey the damage. There are overturned cars, piled-up boats and destroyed businesses.