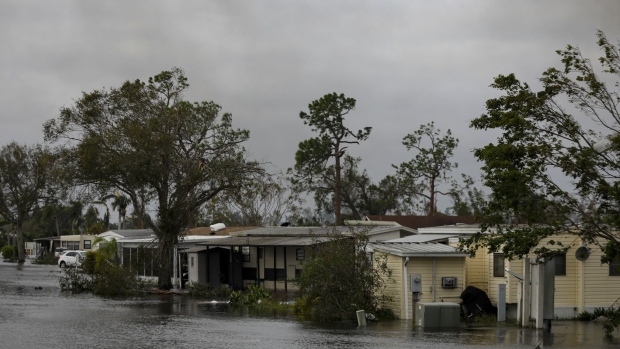 A flooded trailer park following Hurricane Ian in Fort Myers, Florida, US, on Thursday, Sept. 29, 2022. Hurricane Ian, one of the strongest hurricanes to hit the US, weakened to a tropical storm but continues to dump rain on the state as it makes its way up the US Southeast. , Bloomberg

(Bloomberg) -- The difficult job of rebuilding communities pummeled by Hurricane Ian is expected to be made even worse by a problem that’s lingered since the early days of the pandemic: snarled supply chains.

Ian tore a path of destruction across Florida, leaving more than 2 million homes and businesses without power, after landing as one of the strongest storms to hit the US. Residences, bridges and other infrastructure are in ruin, with damage estimates ranging from $65 billion to $100 billion, and Florida Governor Ron DeSantis said it will take years to recover. Construction groups warn that labor shortages and supply-chain difficulties are likely to hamper rebuilding efforts.

“Across the board, we are seeing challenges in obtaining all types of building materials in a reliable time frame,” said Steve Cona III, president of Associated Builders and Contractors’ Florida Gulf Coast chapter.

Damage in Florida’s Lee, Collier and Charlotte counties is “devastating,” and it will take substantial time and resources to rebuild, Cona said. Compounding those challenges are ongoing labor shortfalls, supply-chain issues and the fact that material costs remain unpredictable, he said.

Lumber prices have been volatile since the pandemic began, and this year’s surge in borrowing costs sent prices falling from records set in 2021. While there is an oversupply of material in North America, disruptions from Ian may cause logistical issues transporting lumber, according to Kevin Mason of ERA Forest Product Research.

“If you’ve just had a hurricane go through, your logistics are going to be a challenge,” said Russ Taylor, president of consulting firm Russ Taylor Global in Vancouver. “The whole building sector is going to shut down for a while until things dry out and waters recede.”

While supplies from lumber mills have been improving in 2022, there are still issues getting wood to market due to a shortage of rail cars and trucks, Taylor said. The storm will slow deliveries to affected areas, creating a glut of lumber and sending prices lower, he said. Florida and South Carolina have seen strong building demand, and that will dip in Ian’s immediate aftermath, Taylor said.

On Thursday, lumber futures in Chicago fell as much as 6.9% to touch the lowest price in more than two years.

Home Depot Inc. teams on the ground in Florida are assessing damage to homes, which will help the company better understand what they might need to supply to Florida sites, said Pete Capel, head of emergency operations for the retailer. Home Depot positions goods ahead of hurricane season in areas along the Gulf Coast and Southeast, and they’re either there already or on the way to stores, he said.

“Improvements have been made” since earlier in the pandemic, Capel said, but “there are still some constraints in the supply chain in total.”

Homes that managed to withstand the storm are at risk of additional damage in its aftermath. Properties flooded with several feet of water -- “homes that are boarded up, devoid of light or airflow” -- are quickly at risk of mold damage, said Harris, who’s worked in insurance adjustment for more than 20 years.

“In Florida, microbial growth has a life of its own, and you have to quickly get in and you have to cut out all the drywall to let the wall cavities dry out,” said Jason Holzem, a public adjuster at Day Adjusting & Consulting. “Otherwise your entire property will be covered in mold -- it’ll be on your ceilings, on your walls, all your personal property, and you can’t live in that environment. And then we end up getting black mold, which is toxic.”

Adding to labor constraints, logistical problems transporting supplies and volatile materials costs is the wide path of Ian’s devastation. That means everyone rebuilding has to cope with the “demand surge” resulting from other residents and business owners also trying to recover from the hurricane, said Michael Millette, founder of Hudson Structured Capital Management, which focuses on the reinsurance and transportation sectors.

“You need to keep in mind that it costs a lot more to rebuild your house when everyone in the region is rebuilding theirs,” Millette said. “There are only so many contractors and so much building machinery and material.”

Darryl Davis, an adjuster for more than 30 years, said his company -- DDavis & Associates Inc., in Coral Springs, Florida -- has fielded a couple dozen calls for adjustments so far, and expects that figure to grow exponentially as residents regain mobile-phone service. He plans to start inspections Saturday, covering the areas of Marco Island, Cape Coral, North Port and Venice.

“It’s gonna take months and years to get the area back to where it was before the storm hit,” Davis said. “I’m sure there’ll be shortages of materials. There were a shortage of materials before this happened, so it’s only gonna exacerbate the problem.”