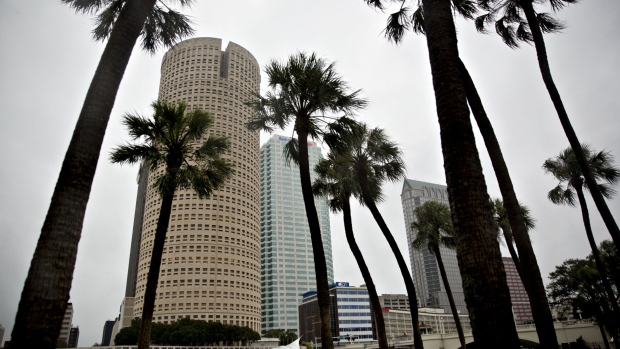 Hurricane Ian is gaining power as it nears Cuba on a path toward Florida, threatening to become the worst storm to hit Tampa in over a century.

Ian’s winds jumped to 110 miles (177 kilometers) an hour as it churned in the Caribbean about 85 miles east of the western tip of Cuba, the US National Hurricane Center said in an advisory at 2 a.m. New York time. It started Monday at 75 mph.

The storm’s path has shifted slightly east and the Tampa area is now at the center of the probability track forecasts. A hurricane watch and storm surge warning is in effect along Florida’s west coast, including Tampa Bay. More than 300,000 people are expected to evacuate.

“This is a life threatening situation,” the Brad Reinhart, a hurricane specialist at the center, said in his analysis. “Promptly follow evacuation and other instructions from local officials.”

The eyewall of the storm was nearing the coast of western Cuba early Tuesday, the NHC said. Tropical storm winds could reach Florida late Tuesday, with hurricane conditions arriving Wednesday morning, bringing the potential for significant river flooding across central parts of the state.

Cuban President Miguel Diaz-Canel warned the Communist nation Monday that it would be facing a “challenging week.” Hurricane alerts were issued for seven western provinces including the capital, Havana.

Ian will ride up Florida’s west coast, dragging its most powerful side along the coastline before making landfall by the end of the week. The state will very likely see widespread surge, wave and rain impacts no matter where it hits, Ryan Truchelut, president of WeatherTiger, said in an email.

Its winds are forecast to peak at 140 mph late Tuesday through Wednesday, before dropping to 120 mph on Thursday, the center said. The storm will encounter wind shear in 36 to 48 hours, which will hold it back from gaining even more strength.

Still, Hurricane Ian could be the worst storm to hit Tampa in 101 years, according to Chuck Watson, a disaster modeler with Enki Research. The area has had many close calls in recent years, but the last devastating strike on the Tampa-St. Petersburg area was a 1921 storm that would have caused US$30 billion today.

On its current track, Ian could bring tropical-storm strength winds to more than half the orange-growing acreage in the state, Watson said.

Demand for diesel for generators in Florida has soared by more than 10 times the norm, said Eliot Vancil, president of Fuel Logic, a distributor in the state. Requests are coming from nursing homes, grocery stores, hospitals and the like, with demand heavily focused in Tampa, he said in a phone interview. There is no shortage of fuel in the state yet, but “there is a shortage of time to get it done” before the storm, he said.

Fertilizer producer Mosaic Co. said it’s finishing storm preparations at its phosphate mining and production facilities in Florida and sites in Louisiana. Employees at its headquarters in downtown Tampa and other Florida locations are working remotely.

Ian is expected to miss most of the energy infrastructure in the Gulf of Mexico, though Chevron Corp. and BP Plc said they’ve shut some offshore oil production platforms in the region and evacuated employees ahead of the storm.

It’s forecast to be a Category 4 hurricane off Hillsborough County, which includes Tampa, and could push a storm surge of 15 feet into the shoreline, Tim Dudley, county emergency management director, said in a YouTube post. Mandatory and voluntary evacuation orders have been issued and the county is opening shelters, Bonnie Wise, the county administrator, said in a briefing posted on YouTube. The county expects to evacuate more than 300,000 people, she said.

Tampa Electric said Monday it may proactively cut power to a part of downtown Tampa early Wednesday to avoid serious damage to its equipment from an expected saltwater storm surge.

Tampa International Airport will suspend operations at 5 p.m. Tuesday, and American Airlines Group Inc. issued a travel alert for 20 airports in the western Caribbean and Florida. Tampa tourist attraction Busch Gardens will close Tuesday and Wednesday, and the Tampa Bay Buccaneers football team will use the practice facility of their cross-state rivals, the Miami Dolphins.

President Joe Biden approved an emergency declaration for Florida on Saturday, freeing federal disaster aid to the state. He also postponed a scheduled trip on Tuesday to the state that included a Democratic National Committee rally in Orlando. Governor Ron DeSantis declared a state of emergency across Florida and warned residents to prepare.

Ian is the second destructive hurricane to rip across the Atlantic in less than a week, following Hurricane Fiona. Fiona struck Atlantic Canada over the weekend, causing extensive damage, power outages and flooding across Nova Scotia and Prince Edward Island. Damages to the region are estimated at US$3.5 billion, though secondary factors and rain may push costs above US$4.5 billion, according to Enki Research’s Watson.