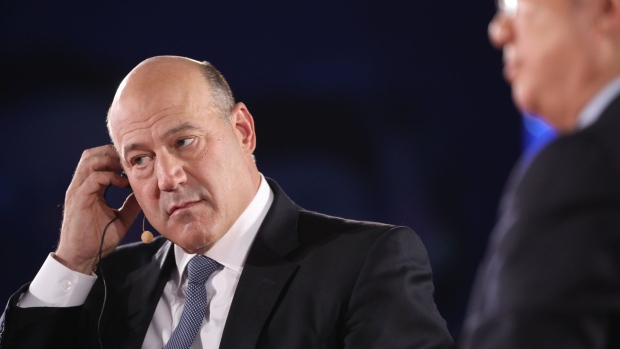 Gary Cohn, former assistant to the U.S. president and former director of U.S. National Economic Council, attends a panel discussion at the Bloomberg New Economy Forum in Beijing, China, on Friday, Nov. 22, 2019. The New Economy Forum, organized by Bloomberg Media Group, a division of Bloomberg LP, aims to bring together leaders from public and private sectors to find solutions to the world's greatest challenges. , Bloomberg

Cohn, 60, served as assistant to the president for economic policy and director of the National Economic Council from January 2017 until April 2018. Before serving in the White House, Cohn was president and chief operating officer at Goldman Sachs from 2006-2016, and held a number of other leadership positions during his 26 years with the investment bank.

Krishna took the helm at Armonk, New York-based IBM as the pandemic gripped the global economy. He moved quickly to define the tech company’s future, spinning off IBM’s legacy IT-management services from its new hybrid-cloud computing and artificial intelligence unit, which the company hopes will return it to revenue growth -- and relevancy. IBM’s shares, which have declined about 7 per cent in the past year, were up almost 1 per cent on Tuesday in New York.

In a tweet Tuesday, Cohn said IBM’s current strategy makes it an “exciting time to begin working alongside” Krishna and IBM’s roster of clients.

Currently, Cohn is co-chairman of Cohn Robbins Holding Corp., a $720 million special-purpose acquisition company he launched with investor Cliff Robbins. He invests across sectors including cybersecurity, blockchain infrastructure, regulatory technology and medical technology. Cohn said in a tweet that his commitment to Cohn Robbins is “unwavering.”

Cohn has taken on a number of advisory roles since he resigned from the Trump administration over a disagreement about steel and aluminum tariffs, including assignments with a cybersecurity firm, a gaming company and a blockchain startup.

At one point, Cohn was seen as well positioned to rise to the head of Goldman Sachs. But that promotion eluded him before he decided to cast off his corporate jacket and join Donald Trump’s administration in Washington.