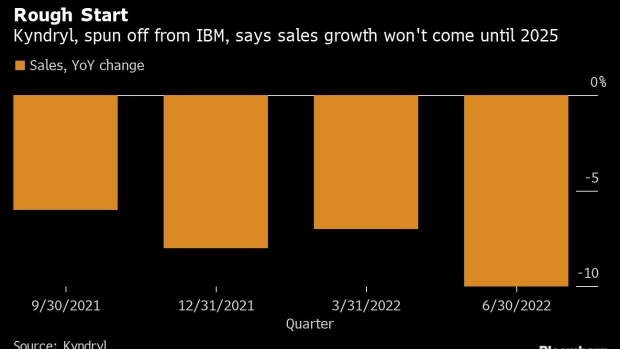 The International Business Machines Corp. (IBM) signage is displayed in front of the Thomas J. Watson Research Center, the headquarters of the company's research, in Yorktown Heights, New York, U.S., on Tuesday, Feb. 11, 2014. IBM is spending $1 billion to build a new division around its Watson supercomputer, which can analyze large volumes of data and answer questions. Photographer: Bloomberg/Bloomberg , Bloomberg via Getty Images

Management of public cloud services owned by Microsoft Corp., Amazon.com Inc. and Alphabet Inc. will be one of the most significant growth drivers in coming years, Chief Executive Officer Martin Schroeter said Wednesday in an interview with Bloomberg.

“Look, we run some of our customer’s workloads on the IBM Cloud today,” Schroeter said. “It’s just that the others have a much bigger market share, so it’s a much more important market for us in the future.”

The spinoff left New York-based Kyndryl with 90,000 employees and a large chunk of the legacy infrastructure services business that had been a drag on growth for International Business Machines Corp. before the split. In the quarter ended in June, Kyndryl sales declined 10% to $4.3 billion, which beat analyst estimates. Shares have dropped 72% since they began trading last October.

“We’re shrinking less than when we were part of IBM,” Schroeter said. Deals being signed today are much more profitable than when the company was a unit of IBM, in part because Kyndryl can offer products from those who used to be competitors. Kyndryl is targeting sales expansion by 2025.

While the spinoff was officially completed last November, the two companies still have tie-ups. Big Blue owns about 10% of Kyndryl’s stock, and counts on the company for a significant amount of mainframe and software sales. Plus, Kyndryl is still transitioning away from IBM’s software and workflows, for which it has a two-year deadline. There’s a countdown clock in the office with 443 days left. Schroeter said he walks by it every day.

“Prior to being born, we were very deep and very focused on IBM technologies and didn’t really have the freedom of action we needed to,” Schroeter said.