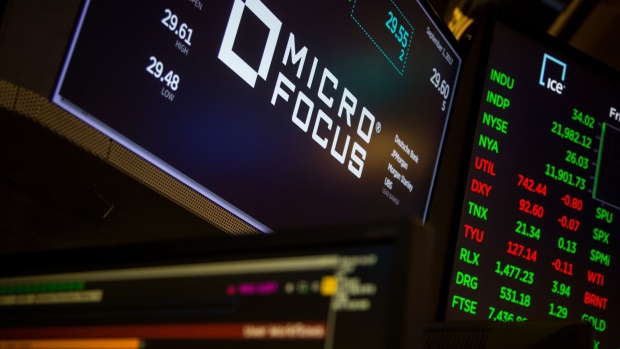 Micro Focus International PLC signage is displayed on a monitor on the floor of the New York Stock Exchange (NYSE) in New York, U.S., on Friday, Sept. 1, 2017. U.S. stocks rose and Treasuries declined as reports showing a gain in consumer sentiment and a rise in manufacturing offset a mediocre August employment report. Photographer: Michael Nagle/Bloomberg , Bloomberg

(Bloomberg) -- International Business Machines Corp. sued Micro Focus International Plc, alleging it contracted with IBM to develop software applications for its mainframe systems and then copied its programs to create a competing product.

In the lawsuit, filed on Monday in federal court in New York, IBM claims the Newbury, UK-based firm copied software for its Customer Information Control System Transaction Server, or CICS TS, which allows companies to run mainframe applications for operations such as travel requests and payroll online and communicate with other systems.

IBM says Micro Focus had access to its software for almost two decades and at one point copied it to make the rival product, Micro Focus Enterprise Suite. The product offers a web service implementation that includes a file for mapping data that has almost the same architecture and design as a similar file created by IBM, according to the suit, which seeks unspecified damages for claims of copyright infringement and breach of contract.

Micro Focus didn’t immediately respond to an email seeking comment on the suit.

Micro Focus sells enterprise software to thousands of companies, including Airbus SE, Hewlett Packard Enterprise Co. and Kellogg Co., according to its website. It has seen declines in its revenue and adjusted earnings before interest, taxes, depreciation and amortization every fiscal year since 2018. Canada’s Open Text Corp. agreed in August to buy Micro Focus for about $6 billion including debt.

In May IBM ended Micro Focus’s involvement in a program that allows third parties to use access to its products and software to develop software applications for its mainframe systems, according to the complaint.

“IBM cannot stand idle while a licensee exceeds the grant of its license and blatantly disregards its contractual obligations by reverse-engineering and copying IBM’s copyrighted software, creating a derivative work, and then promoting and profiting from that pirated software,” the company said in the suit.