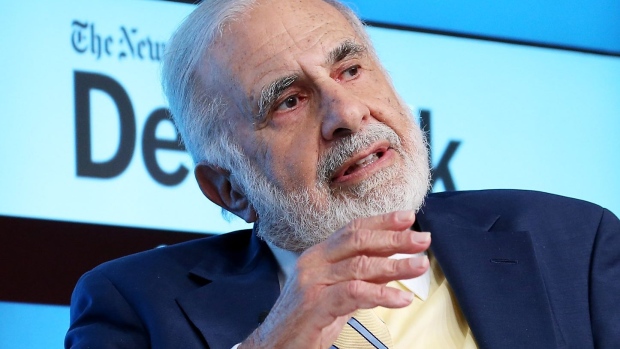 (Bloomberg) -- Activist investor Carl Icahn is calling on the leadership of Occidental Petroleum Corp. to reveal whether they were approached by any potential buyers prior to agreeing to acquire Anadarko Petroleum Inc. for $37 billion.

The billionaire, who owns 3% of Occidental, said in a letter to the company’s shareholders Wednesday that Chief Executive Officer Vicki Hollub and Chairman Eugene Batchelder were trying to preserve their own jobs ahead of the interests of investors.

“Why did they decide to embark on this ill-advised bet that has already destroyed over $30 billion in stockholder value; and if oil continues its decline, we believe will jeopardize the dividend, leaving stockholders to suffer even more?” Icahn wrote in the letter, a copy of which was seen by Bloomberg News.

A representative for Occidental wasn’t immediately available for comment.

Icahn nominated a slate of directors in November to replace the entire Occidental board ahead of its annual general meeting, which hasn’t been scheduled yet. Last year’s shareholder meeting was held in early May.

The billionaire investor has been a vocal critic of Occidental’s takeover of Anadarko. He has taken aim at the fact the deal wasn’t taken to a shareholder vote and has been critical of Hollub’s decision to use $10 billion of funding from Warren Buffett for the transaction. He has said in the past he believed Buffett “took her to the cleaners” by accepting the financing for the deal.

Icahn said in Wednesday’s letter that he believes the Anadarko deal was a “defensive maneuver” that allowed Occidental to be the acquirer rather than be acquired itself. He argues that Hollub and Batchelder chose to structure the deal in a way that avoided a shareholder vote, in part, because they feared the vote would fail. He also said it allowed them to avoid disclosing in regulatory filings whether it had been approached by a potential acquirer.

He said the company should have walked away if they feared they wouldn’t win a shareholder vote. Rival bidder Chevron Corp.did just that, he said.

“Chevron, unlike OXY, exercised restraint and refused to engage in a bidding war when the price for Anadarko became untethered,“ he said, referring to Occidental’s stock symbol.

Icahn has been seeking records through the courts about the company’s interactions in the lead-up to the Anadarko deal.

“If we are right, which we believe we are, these actions are unconscionable under any measure,” he said. “If, on the other hand, we are wrong, then we call upon Hollub and Batchelder to publicly and clearly state whether or not OXY was approached as a possible acquisition target? It’s a very simple question -- one that management should address on the February earnings call.”

Shares in Occidental climbed Tuesday after the company said production exceeded estimates despite lower capital spending, a key rationale for the Anadarko deal. Occidental is scheduled to announce its full fourth-quarter results on Feb. 27.

“You don’t have to be Sherlock Holmes to realize that these actions point to the fact that Hollub and Batchelder are hiding something important, such as the possibility of an acquirer,” Icahn said. “If ever there was a time for a CEO and Board to be held accountable, it is now.”

To contact the editors responsible for this story: Liana Baker at lbaker75@bloomberg.net, Fion Li