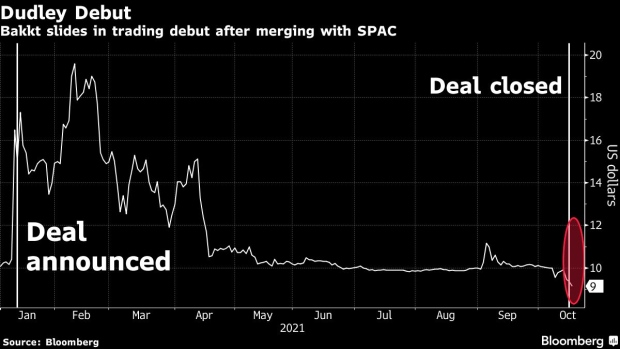 (Bloomberg) -- Building enthusiasm for the first U.S. Bitcoin exchange-traded product isn’t doing one exchange much of a favor.

Bakkt Holdings Inc., a digital assets platform majority owned by Intercontinental Exchange (ICE), started trading for the first time on Monday after completing its SPAC merger. And shares promptly slid, even though its business stands to benefit from more Bitcoin-linked financial products -- the U.S. Bitcoin ETF is focused on futures -- coming to market this week.

The Alpharetta, Georgia-based company, founded in 2018, initially focused on developing Bitcoin futures contracts and a custodial service that can be used by hedge funds and other institutional investors to store their digital assets. The business has since expanded, partnering with travel and leisure companies such as Choice Hotels and Starbucks to allow their customers to convert loyalty points into cash or buy a cup of coffee with their coin via their app.

The coming ETF is “an important milestone” and “more opportunity for our platform and our business” but shows that “we’re just getting going with all of this,” Gavin Michael, chief of Bakkt, said in a Bloomberg Television interview. Michael, former head of technology for Citigoup Inc.’s global consumer bank, joined Bakkt as CEO in January, stepping in for interim CEO David Clifton.

Bakkt showed that its total serviceable addressable market could grow to an estimated $5.1 trillion by 2025, with cryptocurrency accounting for about $3 trillion of that pie in a June investor presentation. The company also said it planned to expand internationally, central bank digital currencies and NFTs or nonfungible tokens.

ICE competitor, CME Group, rolled out its own futures contracts for digital currency in 2017; shares rose as much as 1.2% on Monday. Bakkt shares fell as much as 6.2%.

Lack of enthusiasm for Bakkt showed up in the days before its public market debut. When SPAC shareholders of VPC Impact Acquisition Holdings were given the option to stay invested and own Bakkt shares or get a refund, roughly 41% chose to redeem or get their money back, according to deal documents. Bakkt is set to receive gross proceeds of about $448 million from that SPAC deal.

“We’re a platform, so as you start to think about how we expand our platform and opportunity to reach -- really, the infusion of capital is fully funding our product roadmap and allowing us to do it faster,” Michael said.